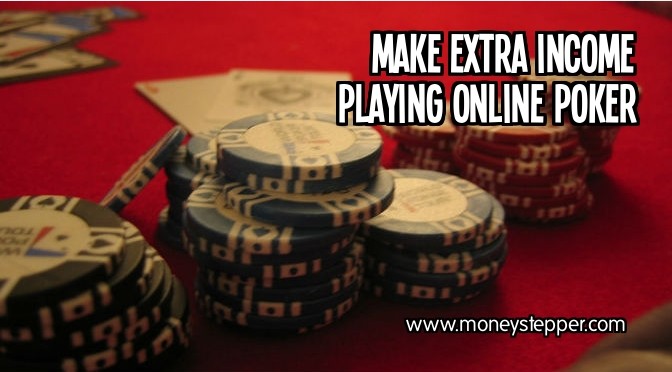 As an author of a personal finance website, writing on the topic of playing online poker to make extra income is a bit of a risk. Some might say it’s a bit of a gamble!

However, whenever I get into a conversation with someone and I explain that I played online poker “professionally” for a year after university, they become interested. Furthermore, when I explain that I was able to earn enough to put down a deposit on a house, they become truly fascinated.

Therefore, I decided that I would today share the hints and tips I learned along the way which can help you make extra income by playing online poker.

Is poker is a game of skill or luck?

The first thing to address is whether poker is a game of skill or luck. If poker is only ever a game of luck, then we should never be using it as a tool to earn extra income as it would only be akin to gambling. Luckily, I’m very convinced that it’s a game of skill. Let me explain via a quick example.

Let’s consider two individuals who are playing No-Limit Texas Hold’em poker against each other. Player A thinks only of his own hand and how that looks. Player B thinks just one level ahead and considers what hand he has AND what hand his opponent has.

These two players have played together before, and player B understands that player A will only bet more than 25% of their pot pre-flop with either AA, KK, QQ or AKsuited.

Ok, now Player B has a decision to make. Luckily, he has the knowledge of his opponent and his favourite tool that EVERY poker player will need to master: maths.

Player B firstly calculates the odds he is behind provided. Everything that has already happened from a mathematical perspective we can forget about; it’s a sunk cost. Player B just has to determine that he has to put in £78 more, for the chance to win a total return of £200.

Next Player B needs to work what his actual odds of winning is. There is where it becomes complex. The chances of Player B winning the hand under the possible holdings of his opponent is:

Each of these %s is an estimation (but are right within 1-2%). For example, when both players hold QQ, it is not guaranteed that they will tie as either player could get a flush. However, given that both is equally likely, it’s okay to estimate that the pot will be shared 100% of the time, which is the equivalent to us winning the whole pot 50% of the time.

Now, we can calculate the odds of winning the hand:

By working through the maths, we get an overall chance of winning as 28%. For confirmation of this figure, check the screenshot from PokerStove later in this post.

Therefore, there are two ways to look at the maths to make the comparison:

Whichever way you look at it, the best decision is to fold and not call the bet.

Let’s look at a role reversal. Imagine that Player A picked up QQ. His thought process would simply be that QQ is a good hand (because they only think of their own hand and not the hand of their opponent) and therefore they call. However, under the same circumstances, that call costs Player A £22 every time they make it.

If any of the following is true, you are not ready to try earning money by playing online poker:

Think about who makes the money

The other thing to think about when considering online poker is who actually makes money. Well, the definitive answer is “the online poker site” and this may make you think that poker is indeed gambling.

However, this is structured in a very different way to gambling.

When you go to the casino and play roulette, and say you bet £1 on every single number (0-36 inclusive). Therefore, you bet £37 total. However, when any one number rolls in, the casino will only pay you pack £35.

Therefore, on any single bet, your “expected value” (EV) is negative, but you have the chance of winning big if you put £10 on one number and it rolls in. This is gambling.

However, online poker is different. In online poker, you play against other humans, and the winner of every hand pays a “commission” to the site (called a “rake”). Pokerstars, for example, charge 6.5% rake for the above example game, up to a maximum of £3 per hand. This can be built into the odds which you calculate on each hand, but effectively the easiest way to think about it is that you need to be able to beat your opponent by such an extent that it also exceeds the amount of “rake” you’ll pay.

So, how did I start playing online poker? Why did I stop?

Well, I’ll keep this fairly brief, but I first starting playing (badly) with friends at school and in my summer holidays when I came back from university. During this time, I first started to think about the mathematics of it all. Whilst I wasn’t a “good” player, I started to feel that I had an edge over the people I was playing against, and I made a few pounds in these games.

I played a little during University with friends, but this was the time that I first discovered online poker. I wasn’t great at this time, but luckily back in 2005, the average player in the low stakes that I could afford was even worse. I played more and more in my final year at University, to the point where I was consistently making a profit at what was a reasonable hourly wage.

Then, after University, I didn’t have a job immediately lined up, so I took the conscious decision to take a “gap year” and play online poker for a year (in 2006/07) and see how I got on before determining whether to look for a “real” job.

Long story short, I earned an hourly wage that I’m still struggling to match now (8 years after starting in the finance industry and becoming a chartered accountant) and all that without tax, due to tax regulations in the UK not requiring tax to be paid on poker winnings. In one year, I earned enough to put down a decent deposit on a house and have enough left over for savings and to pay my day-to-day expenses.

So, why did I stop? Well, for a number of reasons:

Therefore, at the end of the year, I stopped playing online poker as a “career”, but instead carried on playing as a method of earning additional side income when I had the time. For example, in 2010, I took 7 days holiday from my full-time job and played enough hours to earn the money to fund a fortnight’s trip to New York.

So, unfortunately, I never made it to the World Series of Poker, but I did manage to play enough poker to earn my way in the world.

What game or limits should I play?

Enough about me. Back to you and your decision on whether online poker is right for you. When starting out, many people will ask what game and limits they should play.

What game you play is completely up to you. Generally cash games (instead of tournaments) are more profitable as you can play more hands per hour. However, either are viable options.

When it comes to the limits you play, there are generally two factors to consider:

What can I reasonably earn?

Generally, players talk in terms of BB/100, which is big bets per 100 hands, where a “big bet” is twice the big blind. After rakeback, it’s considered about average that a good player can beat the lower limit games for around 5BB/100.

Also, on average, a player could expect to play around 85 hands per hour at a 6 person table. Multi-tabling is also fairly common (I usually played 8-12 tables at once during my year of poker) and so we’ll say you play 4 tables concurrently.

The tricks of the trade

If you are getting into online poker, there are a few things you’ll need to help you along your journey:

As my 2500+ word count is suggesting, I could literally talk to you about online poker all day.

To conclude: be careful. For a non-skilled player, online poker will cost you money.

However, if you approach it in the right way, learn everything you can, and treat it as a job rather than a game, then you could earn a reasonable wage from doing something you enjoy as a side hustle.