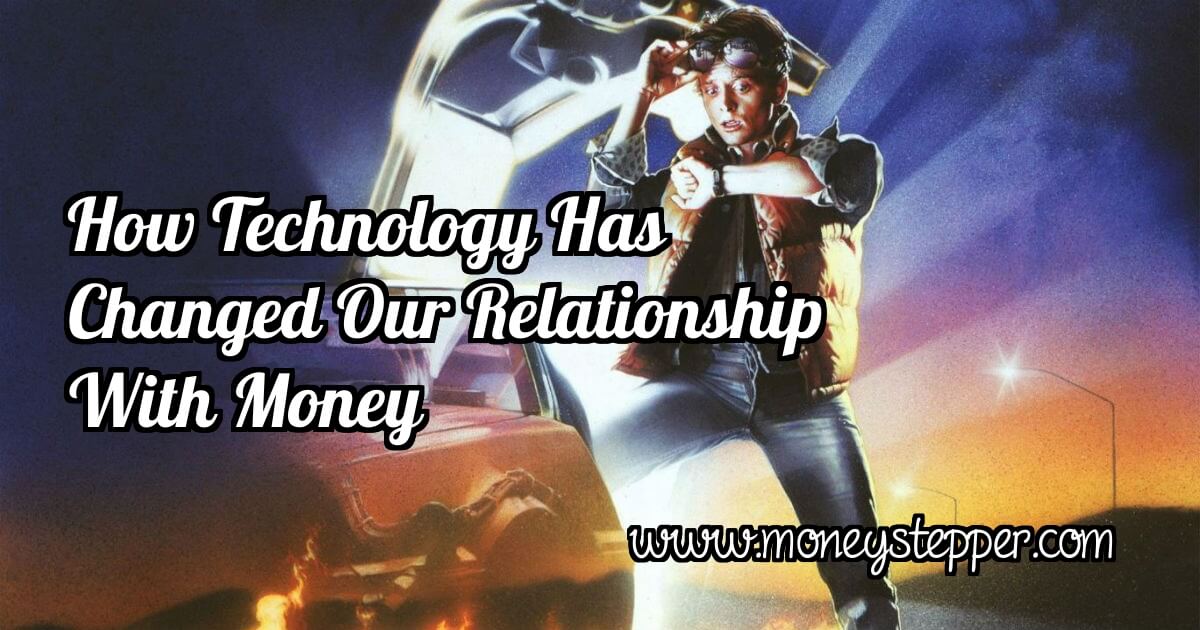 For those of you who missed it (really, where have you been?) 21st October 2015 was “Back To The Future Day”. It was the day that Marty and Doc Brown travelled to in the future in the classic 1989 sequel Back To The Future Part II.

I’m a geek for loving Back To The Future. I admit it.

But, I’m a true geek for recognising it was Back To The Future day and then asking myself what had really come true in that time. This was aided by a very amusing (although a little sweary – careful kids) video created by the guys at Comedy Network:

But, I then asked myself a question. A question that truly qualified how much of a finance geek I was. I wondered: how much has technology changed in personal finance since Marty and Doc powered up the DeLorean back in 1985.

This made me think about three very key areas where technological changes in the personal finance world have hugely improved our relationship with money.

The first huge change is in banking and how we manage our money.

In 1985, when Marty and Doc fired up the DeLorean, their bank accounts were managed in branch (and very occasionally over the telephone). Everyone had a “paying-in book” which was updated by the person in the bank when you took some cash to pay in or withdraw.

The first ATM was installed in the US in 1969, but did not become common place until the late 1980s. Therefore, if you were lucky enough to be in a town with an ATM, it was still probably only outside of your local branch and hence you still had to travel to the bank to manage your money.

How things have changed! In 2015, it is now commonplace to complete most of your banking transactions online. The need to go to a branch is now pretty much limited to paying in cheques, opening a new account and if you have an issue (and even the latter two are usually dealt with online or resolved by help centres over the phone).

Cash can be withdrawn for free at most ATMs almost everywhere.

More impressively, you can now manage most of your banking needs from your mobile phones as internet banking moves to mobile phone apps.

Shopping has also become much more convenient as a result of technology. No longer do people have to take the cash that they have withdrawn from the bank branch to the shop to exchange for goods or services.

Now, it’s as easy as swiping a little plastic card at the till, or better still staying in your pyjamas at home and buying the product by clicking on a little button on your laptop, tablet or mobile phone. Again, something that people in 1985 could only dream of!

Another major technological advancement has allowed people to accept payments on debit and credit from almost anywhere.

Mobile payment technology has made it easier than ever for consumers to pay on the move and has ensured that accepting mobile payments is not only a thing for big businesses.

Payleven, an innovative mobile payments company, has for example established a platform to allow a small business owner to manage and sell all of their products using mobile and credit card payments.

They connect a small mobile chip and pin reader to a smartphone or tablet via Bluetooth. This allows even the smallest business owners, and even your lemonade stand owner, to accept payments from debit or credit cards in seconds.

Banks have indeed been improving their technologies forward to meet customer demand. However, they haven’t been the fastest movers, and are currently being out-innovated by the emerging peer-to-peer economy.

The concept it simple. Rather than having a two people working through a middle man to provide and use services, the peer-to-peer economy allows them to deal with each other directly.

The biggest shift here has been with “peer-to-peer lending” where technology companies have allowed lenders to be matched directly to borrowers. This removes the bank in the usual process flow of a saver depositing money in the bank and the bank then lending that money to borrowers.

Technology has also allowed similar moves in the foreign exchange market, where you can now transfer money into foreign denominations using peer-to-peer services such as Currency Fair, rather than traditional banks and transfer services.

Finally, the peer-to-peer economy has also gripped the service sector, with Uber changing the face of the taxi industry and Airbnb the accommodation industry. Most consumers will agree that this is definitely for the better (although black cab drivers seem to disagree).

Another huge plus for consumers has come in the buying and selling of stocks & shares. In the 1980s, Marty and Doc would have had to deal with a physical stock broker. This would have cost a lot of money in both upfront costs and fees, and “deals” to buy/sell shares often took days.

Fast forward 30 years and the emergency of online brokers and robo-advisors means that you can make a trade for as little as £5 and it takes a matter of seconds on an automated online platform.

This has made stock investing much more accessible for the vast majority of people.