Where is the best place to live in the UK for your finances?

The United Kingdom is a varied and diverse place. There are some of the world’s greatest cities, wonderful plush countryside and miles upon miles of stunning coastlines. However, in this wonderful land, where is the best place to live with respect to your financial well-being?

Based on six financial, economic and social measures from 2013, we have performed an analysis of where is the best place to live in the UK for your finances.

Using 2013 figures from the Office of National Statistics, we have ranked the twelve regions of the UK (as defined by the ONS) based on the following categories:

In our first attempt to determine the the best place to live in the UK, we take each region and rank them from one to twelve:

A dive into the figures

So, where is the best place to live in the UK? Let’s look at some leading factors:

Life expectancy – whilst this does not vary wildly between regions, the average life expectancy in the best region (South East) is 5% or almost 4 years longer than the worst region (Scotland).

Crime rate – quite the opposite is noted in crime rates. The best crime rate is Scotland with 52 crimes per 1000 people per year, whereas London’s crime rate is 82% higher than this.

Unemployment rate – some variation in the unemployment rate, but the North East and West Midlands are performing worse than all other areas. The closure of the mines still seems to be having an effect!

So, based on these rankings, we get a total a score for each region (where a lower “score” is better): 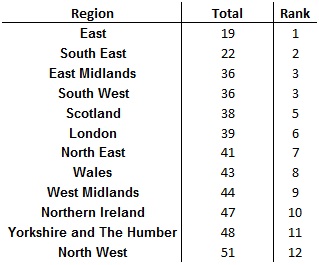 GO EAST!! The best places to live in the UK are the East, South East and East Midlands.

However, this analysis may not be completely fair. For example, there is only 5% difference in life expectancy between all regions, but the disposable incomes vary by up to 80%. Therefore, we may be placing unfair weighting by ranking each category equally.

To address this point, a secondary analysis of the best place to live in the UK has been performed based on a percentage above or below the mean:

Where percentages would be above or below 100%, these have been restricted to 100% in order to not overly weight certain categories: 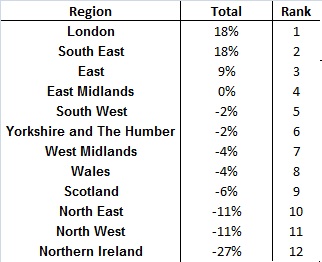 In this scenario, not a great amount has changed other than London has stormed up from 6th to 1st.

The best place to live in the UK is…

London. Well, at least by this method it is. By living in London, you won’t have much money left each month to spend on yourself. However, if you own a property then 2013 would have been very good to you. And, you certainly would not have been alone if you set up a new business in the year!

The North/South divide, or is it?

As with our analysis on house prices, this again brings into question the North – South divide. As with our previous conclusion, this analysis actually shows that the divide is more a diagonal line going from south-west to the mid-east, rather than being a horizontal line across the country. However, the existence of the North-South divide (however it is exactly defined) is clear to see in this analysis.

Let me know what you think. Where is the best place to live in the UK for your wallet? Do you think there is much difference between the regions?