Help to Buy Scheme – Who has it helped? 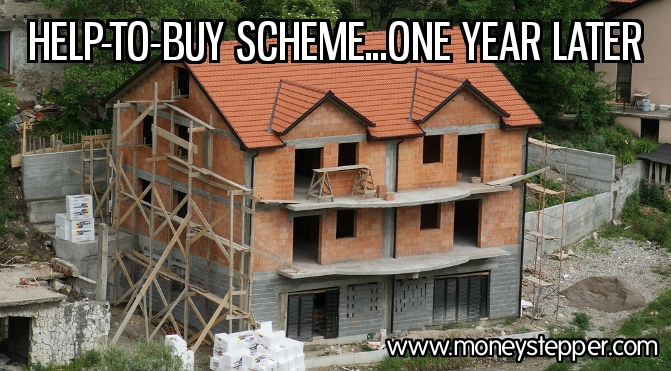 As a reminder, the first part of the Help to Buy Scheme is defined as follows:

Impact on London house prices since the launch

The Help to Buy Scheme has widely been accepted to have had a significant impact on house price increases in the UK.

In comparison, new build properties (those eligible for the help to buy scheme) in London increased in the same period by 20.7%.

This seems to suggest that the Help to Buy Scheme has had a direct impact on house prices in the period.

A Help to Buy Scheme example

As we highlighted in our guest post at The Property Hub, the power of leveraging makes these returns rather remarkable.

Imagine that we bought the average priced London new build property in April 2013, which was valued as £318,039.

Under the Help to Buy Scheme, our financing would have been broken down as follows:

We would also have incurred costs of £9,541 stamp duty and other costs (surveys, legal and mortgage setup) of an estimated £3,000. During the first year, at 4.5% interest rate, the mortgage interest paid would be £10,734.

The property has achieved a capital gain of 20.7%, equal to £65,928 in one year. Depending on how we account for our costs and cost base, our returns for the year are as follows: 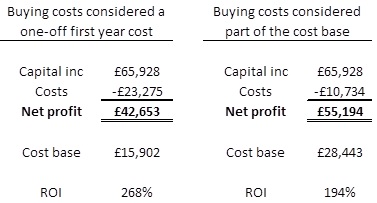 The annual return for the average new build home bought under the Help to Buy Scheme is a remarkable 268% ROI.

How does this compare to other returns in the same period?

Once again, I think this emphasizes that cash is not an investment.

Who has the Help to Buy Scheme hindered?

Obviously, the Help to Buy Scheme has helped these few people who were lucky enough to take advantage of the scheme in April 2013. However, what does it mean for the average first time buyer? Well, clearly its not good. In figures:

However, the increase in the deposit is only the first issue caused by the Help to Buy Scheme pushing up house prices.

Also, when we buy a property of this value, stamp duty will be charged at 3%. In 2013 and 2014, this would have been £8K and £9.5k respectively. Therefore, between the deposit and the stamp duty, we need to save up an additional £4,000 to buy the same property one year on.

The 20% government loan provided under the Help to Buy Scheme, which is eventually repayable and will start accruing interest after 5 years, increased from £53k up to £64k. £11,000 more in one year – that’s 44% of the annual average salary.

The mortgage amount has increased from £199k to £238k. On a 25 year 5% mortgage, this increases the monthly payments from £1,178 per month to £1,410 per month. Based on the annual average salaries, this is clearly the biggest problem of all.

In Q1 2013, the mortgage repayment for the average first time buyer in London on the Help to Buy Scheme would have been 66% of their take home pay. It is suggested (and I would aim for less than this), that your housing costs make up no more than 25% of your take home pay. Therefore, this figure is clearly not sustainable.

You might argue that people won’t get themselves into this situation. However, isn’t this exactly what the Help to Buy Scheme is designed to do: help the average first time buyer get on the property ladder.

With 78% of take home pay spent on the mortgage, and another 6% (£105pm average in London) being spent on council tax and 8% on utilities (£150pm average in London), this leaves the average earner with 8% of their take home pay, equivalent to £149 per month, to spend on everything else in their life (assuming that they save and invest nothing towards retirement or other savings). Clearly, this is not good!!

One year later, who has the Help to Buy scheme actually helped?

However, it is tough to argue given the figures above, that the Help-to-Buy scheme has helped anyone who is looking to buy their first property today.

Ben Southwood, head of macro policy for the Adam Smith Institute, clearly agrees that the Help to Buy Scheme is not helping the people it is “designed” to help: