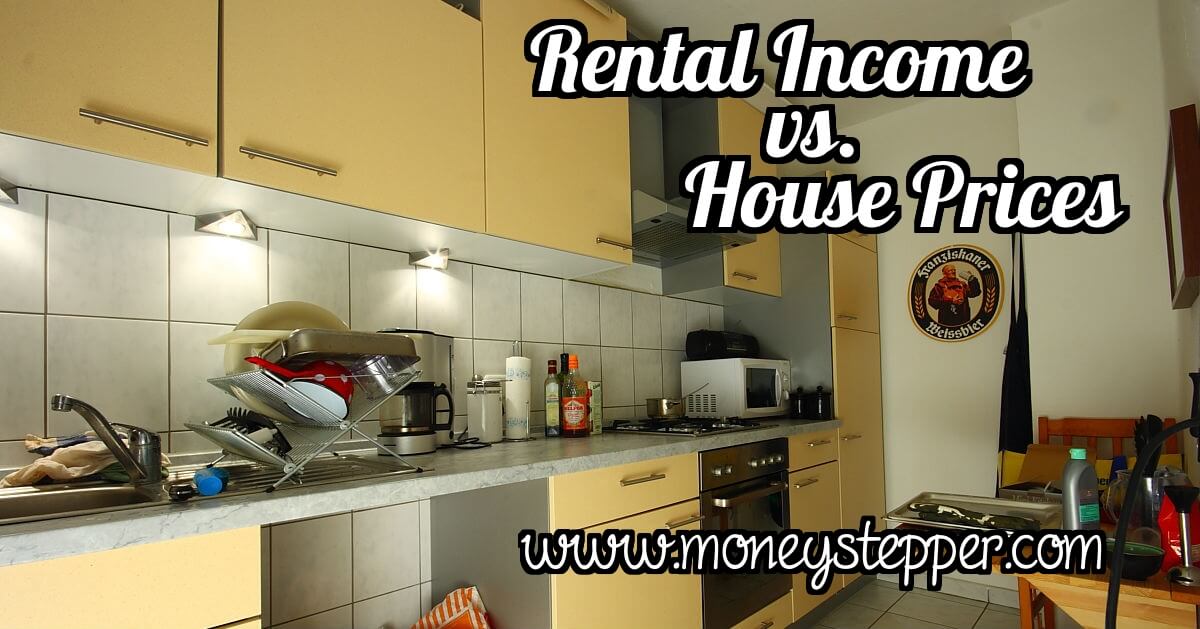 There’s currently is much talk of a housing bubble and the North-South divide is increasing at rates never before seen in the UK. Equally, house prices are equally interesting across Europe, with year-on-year falls being noted in 2013 of over 5% in Spain, Italy, Greece & Cyprus.

However, perhaps even more interesting for long-term investors in property is the performance of rental income vs house prices (i.e. the corresponding yields over time). In the UK, despite a blip in 2008-2010, house rentals have been slowly increasing.

When compared to inflation on the other hand, things do not look as good for rental income. Then, looking at rental income vs house prices (and these yields after inflation)…well, things are quite frankly looking pretty bad. Or good, depending on how opportunistic you might be feeling!

Firstly, let’s take a look at house price rentals for each region in the UK since 2005. As ever, my information is taken directly from what is considered to be an independent and factual source (the Office of National Statistics databases). Rental income data is plotted from quarterly figures from the Q1 2005 until Q4 2013. All prices have been re-based at 100 as at Q1 2005 to show comparative data. 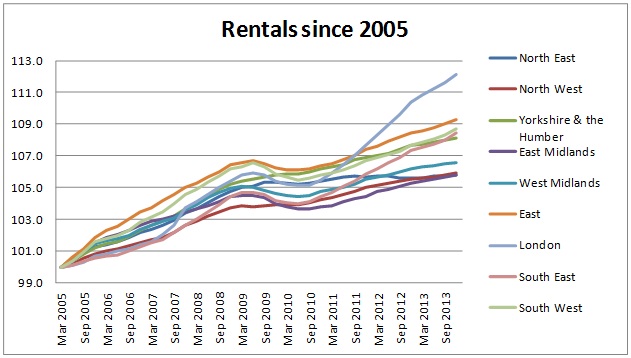 What do we see?

Rental incomes have steadily increased. Today, depending on your region, they are anywhere from 5.8% to 12.1% higher than they were at the start of 2005. This means that the annual increase in rental incomes has been between 0.6% (North East, North West & East Midlands) and 1.3% (London).

From a landlord’s perspective, increases in average rental income is not to be scoffed at.

The eagle-eyed among you, however, will be noting that we are ignoring a significant factor: inflation.

In 2005, £500 may have bought a sofa. However, if sofas increase in line with inflation at 5% per year, for example, that sofa would cost £775 in 2013. Therefore, you can no longer afford the same sofa, despite having the same rentals.

This is the impact of inflation. How does it make our rentals look? Not good!! 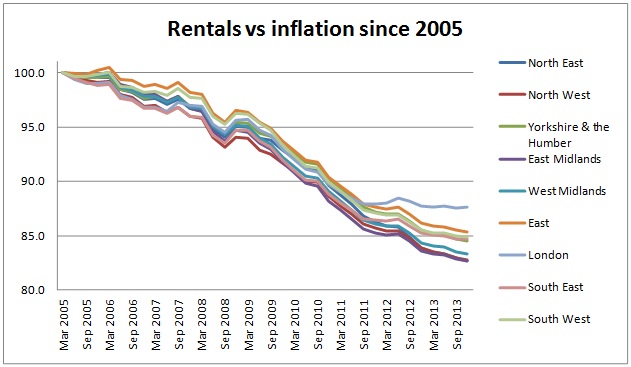 When compared to inflation, the UK average rental income change has actually fallen by 15.7% in that period (or 1.65% per annum). This means that the average landlord is a whopping 15.7% worse off today when they receive their monthly rental income than they were in 2005.

However, rental income isn’t the only form of wealth generation for landlords. House prices can increase, leading to additional value for their owners. Notice that I am very careful in saying “wealth” and “value”, as these additional increases don’t provide any cash flow to the landlord.

That said, although real-term cash flows may be decreasing, many investors may be happy to accept that for a huge increase in capital value. 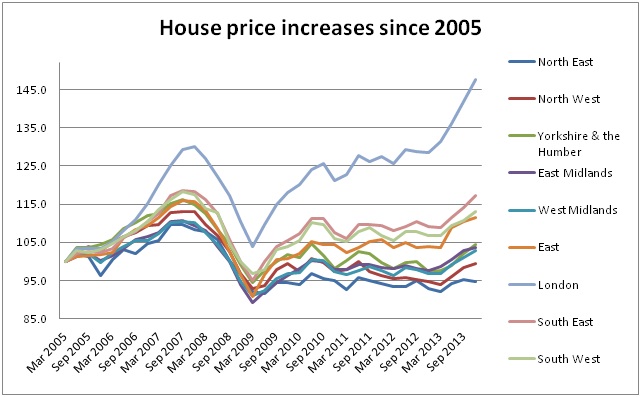 As previously referred to, the North-South divide comes into play significantly in this instance.

Some landlords (well, basically those in London) have seen more substantial house price increases in this period. In fact, London has seen a 47.7% increase (a very healthy 4.4% annual increase) during this time. Given that this includes the so-called bursting of a “housing bubble” or “crash”, this will make those landlords and investors in London feel a little better about the earlier graph regarding house rentals after inflation.

The news isn’t as good in other areas of the UK.

The worst performing region is the North-East of England. House prices here have actually fell (in actual monetary terms – it looks a LOT worse when we taken inflation into account) over the period by 5.4% (0.6% per annum).

However, enough about house prices – the focus of this article is supposed to be on rentals. However, there is of course a link. To work out our gross rental yield, we need to divide our rental income by the property value.

But what does this mean for the yields on property? Buy-to-let investments are generally judged (in the most simplistic terms) based on their annual yields – what is the annual rental income divided by the cost price of the property.

For this investment to be appealing, we would need yields to be high (and hopefully increasing): 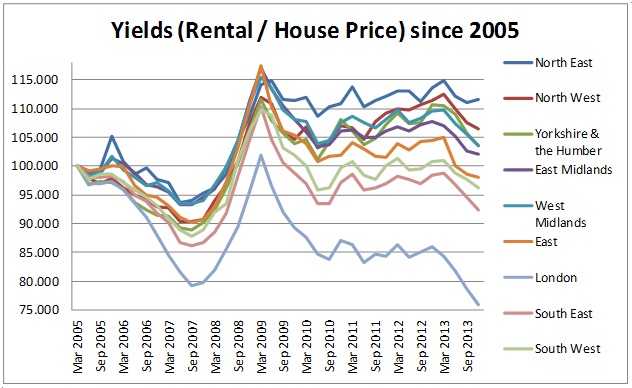 What a difference we see here between the regions! Some yields have increased, whilst others have significantly fallen. Things aren’t looking too good now in certain regions, are they??

On exactly the same property, the rental yields (when accounting for inflation) in the UK are 1.2% less than they were in 2005. On an annual basis, this is pretty much “no change” each year.

However, the split among the regions is interesting.

In the best performing region on this graph, yields have only increased by around 12%. However, in London, they have fallen by a jaw-dropping 24%! A property offering a 10% yield in 2013, now only offers a 7.6% yield.

The other thing to consider in this analysis is the changing interest rates. In 2005, BoE base interest rate was 4.75%. In 2013, it was 0.5%. This means that costs after these gross yields have fallen significantly.

However, it is important to note that we have not considered the inflation on costs after your gross yield. So, interest rates may have fallen, but all other costs (management fees, maintenance, finder’s fees, service charge, etc etc) have increased in line with inflation.

Therefore, building a reduction in interest rates into the graphs above would paint a false picture. Also, these interest rates are low right now. But, our consideration of investing in buy-to-let shouldn’t assume that they will stay this way forever. Because, they won’t!

So, as potential investors, what does this data tell us? Well, firstly (using only this simplistic view) it tells us that buy-to-let isn’t half as appealing today as it was in 2005. House prices have increased in most regions faster that rentals have, leading to falling yields.

It also seems to suggest that London is the worst place to invest (and by quite a considerable margin) if investing for yields. If you could accept less cash flow each month, then investing with a buy-to-let strategy with a focus on capital growth may seem like a sensible decision.

However, with house prices increasing very rapidly in 2012 and 2013 in the Capital, many people are expecting property prices in London to slow down a little (myself included).

Equally, due to rising inflation on other products, and with wages not increasing in line with inflation, people cannot afford higher rents. Therefore, the chance of significant (above inflation) rental increases in the coming years in London appears highly unlikely.

Based on this analysis, I would advise new investors (particularly those with limited capital who do not have the ability to diversify their property portfolio) to steer clear of investing in London for the time being.

What Are The Opportunities?

In all cases, actual rental incomes have increased over this period and properties have remained extremely affordable for new investors.

This has led to increasing yields, compared to declining yields in other parts of the UK. In fact, there are some incredibly attractive yields on properties that you wouldn’t dream of obtaining in the South East & London.

This comes with a certain level of risk regarding tenants not being able to pay (there are higher unemployment rates, for example). But this could happen anywhere. At least in the North, you are able to spread your investment across multiple properties (for the same capital injection as in London) to diversify this risk.

However, if you are investing in the North, do your homework and do it well. While some yields may look attractive, there are properties in many areas that do not have the solid fundamentals in place and the towns and cities are becoming poorer by the day.