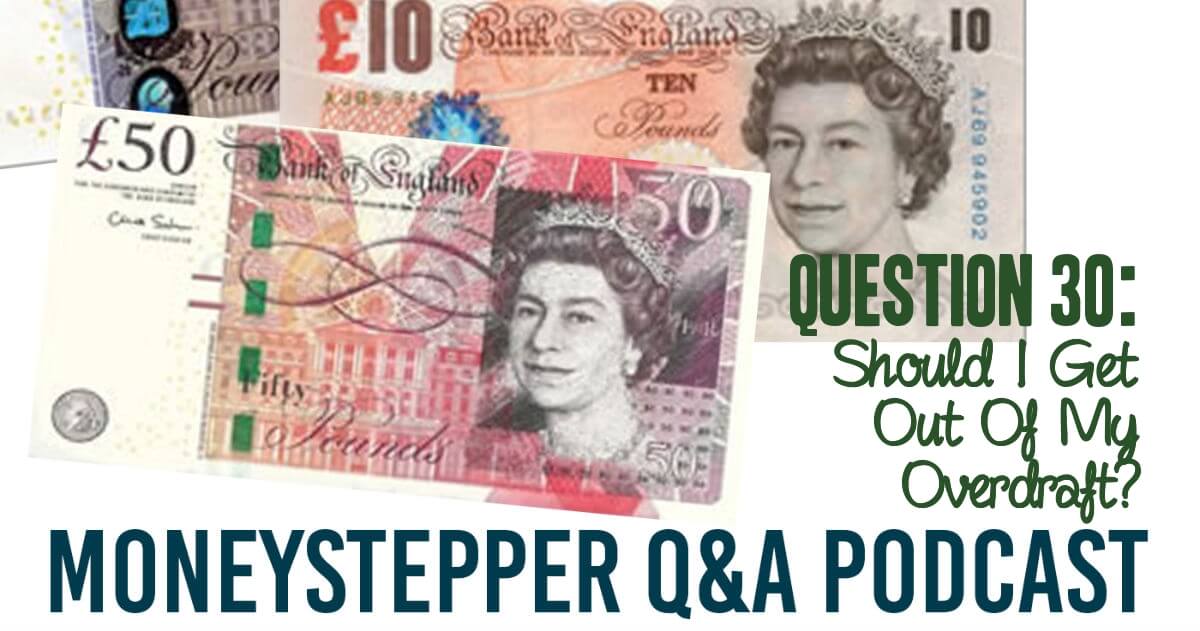 Jane asks: “I have £2000 overdraft and £1500 in credit card debt. I want to consolidate them together to get extra money to help me stay out of overdrafts but don’t know the cheapest way? Credit card ? A big single overdraft? A loan?”

Question 30 – Should I Get Out Of My Overdraft? – Shownotes

I have £2000 in a normal overdraft and £1500 in credit card debt that I’m paying interest on. I want to consolidate them together somehow and get a bit of extra money to help me stay out of overdrafts but have no idea what the cheapest way to do it is? Credit card and with low monthly repayments? A big single overdraft? A loan?

Straight away, I want to include a warning. Let me tell you a story about a friend of my called Tommy. Tommy had 5 different debts, made of two credit cards, two overdrafts and a car loan. All his interest rates were over 10% APR and so when he learned that he could consolidate all his debt into one loan on which he would pay 5% APR. Tommy lumped all his old debt together into his new single loan, and he now had more money to spend each month.

However, that was Tommy’s problem. He told himself that the reduction in interest compared to what he paid before meant that he had more to spend. What he should have told himself was that he could now repay that debt more quickly by focussing the extra money he had on paying down the new consolidated loan. He needed to make a plan.

And, who is Tommy? Well, he’s not really a friend of mine. He’s actually a personification of most people who consolidate existing loans, and then end up falling back into debt by spending the extra money they save by doing so. Most people actually end up deeper than when they started.

I’m focusing on all this because there is some wording in your question that worries me Jane. Whilst I think that paying down your overdrafts by taking out lower interest debt is a good idea, alarm bells started ringing when you said: “I want to consolidate them together somehow and get a bit of extra money to help me stay out of overdrafts.”

Now, this might just be the wording, but it’s key not to think about it as “extra money”, but instead all your decisions should all form part of your debt repayment plan.

I’m assuming that your overdraft is an “agreed” overdraft with a main UK bank. In this case, you will be charged a fee, which can be between £6 per month and £10 per month. On top of this, you pay around 20% APR on your overdraft amount. With Barclays on £2,000 for example, you don’t pay the interest, but pay £1.50 per day.

And all this is assuming that your overdraft is a planned or agreed overdraft. If they weren’t the fees and interest rates will be astronomical.

If you are paying interest on your credit card debt, this will likely be somewhere between 15% and 30% depending on the credit card.

So, your goal and plan can be broken down into four parts:

Finally, let’s look at an example for your situation. If you took out a Virgin Money 34 Month Balance Transfer Credit Card, you can get a “money transfer” for 2.29% one-off fee.

Therefore, you can put £3,500 onto that card, and Virgin will pay £3,500 into your bank account. You can then use this cash to pay down your existing credit card and your overdraft.

Interestingly, if you had the Halifax account we referenced before, and a 30% credit card, your monthly INTEREST before consolidation would have been £98 a month. Therefore, by finding the £80 up-front fee, and consolidating, you only need to find an extra £5 to completely wipe down the debt without ever paying interest on it again.

But, remember, this isn’t the most important part. The integral step is the planning and the monthly budget to make sure that your lifestyle and spending is fully supported by your income. If it’s not, you’ll be back asking the same question again in a few months’ time!