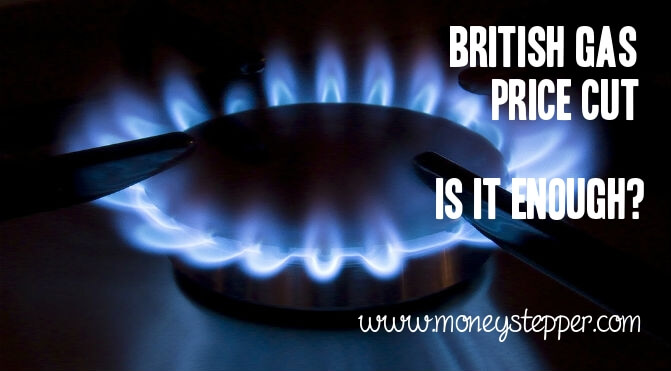 Back in October 2013, we posted an article on Moneystepper questioning why gas prices keep going up. Today, we take a look at the second British Gas price cut in 2015, but ask whether it’s really reflective of underlying gas prices.

To quickly conclude our previous article, we noted:

As reported by BBC News in their breaking news today, British Gas has said that it will cut household gas prices by 5%. This is the second gas price fall in 2015, with an equal 5% price cut being announced by British Gas in January 2015.

So, in total, this reflects a fall in gas prices of 9.75% cumulatively since the start of 2015. The consumer should be jumping for joy, right?

Well, not in my opinion….

Let’s look at this from a VERY simplified point of view. It may not explain everything, but in my opinion it gives us a great starting point.

When this is compared to falling prices with British Gas, then it doesn’t look quite as generous for the consumer.

We should add inflation into the equation, because British Gas will have lots of ongoing costs, but latest UK inflation figures gives a CPI in June 2015 of 0%.

Therefore, British Gas’ raw materials fell by 24% in the last few months, but they have only reduced their prices by 9.75% in 2015.

I, for one, cannot wait to see if the chief executives follow the 0% inflation when they award themselves their annual price rises in order to make sure that the UK energy consumer isn’t ripped off. I doubt it somehow…!