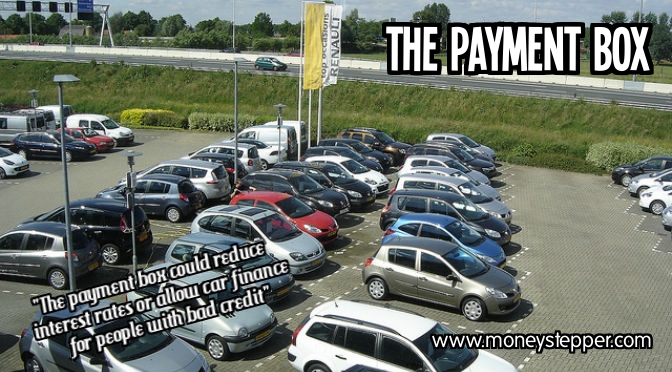 Technology has changed the face of the finance world over the past few years. Just think about the personal finance apps which can help you manage your money on the go. Well, now technology is changing the how you drive…

We’ve already looked at so-called “Black Box Insurance” which monitors how you drive, in order to amend your insurance premiums.

Now, there is a new bit of technology on the block which is looking to change the face of car financing, especially for people with low credit limits: The Payment Box.

What Is The Payment Box?

The payment box is a small device which is fitted to your car when you take out car finance through a car dealer or finance company. The idea is that before your car payment is due each month, the box will begin to flash to indicate that your payment is shortly due.

Once you make your payment, you will be provided with a code which you enter into the device. The device will then know that you have made your payment and nothing will change.

Then, the next month the same thing happens again.

What If You Don’t Make Your Payment

However, if you then miss your car payment, then the device will stop the car from starting. The only way to get the car to restart is to make your payment, receive the code and enter it into the device.

Firstly, don’t worry, the car won’t cut out whilst you are driving. But, if you are overdue, the next time that you come to a stop and turn your engine off, the car will not restart.

Usually, you will have 1-2 days grace period before your car becomes inactive, but if you don’t pay, you aren’t driving anywhere!

Why Do We Need Payment Box Technology?

In the US, where this technology is more widely used (having first been introduced in 2009), this technology has reduced non-payment rates by up to 70% with certain lenders. This should lead to two benefits:

Do Lenders Use The Payment Box In The UK Yet?

Generally, the payment box has not yet been embraced by the European market, but it’s on its way. For instance, Stoneacre Finance offers this service on new and used cars bought from the Stoneacre dealerships in the UK.

It’s important to say that consumers will know when they are signing up for this. The device is clearly in the car that is purchased and you will need to sign various agreements before the device is fitted as part of your car finance agreement.

What Do People Think About The Payment Box?

At moneystepper, we are torn about the value of the Payment Box. We personally think that it is a good idea to reduce interest rates. However, at the same time the Payment Box seems to be used to lend to people who can’t afford it. This reminds us quite a lot of the sub-prime mortgage problems which led to the 2008 global financial crisis.

Equally, if it reduces interest rates, then this may be good additional to the car industry. However, we would question whether taking on finance on new or used cars is a good idea in the first place.

A survey was recently held in the UK and the results were extremely mixed:

When asked if they would accept a finance agreement that required the fitting of a payment box, 33 per cent of respondents said yes.

I’ve previously also heard someone who suggested that this was a wonderful idea and that these devices should be fitted on everyone’s front door to ensure they pay their mortgage, leading to lower interest rates for people who pay on time!!  He was obviously joking, but he’s got a reasonable argument, right?

What do you guys think about the Payment Box?