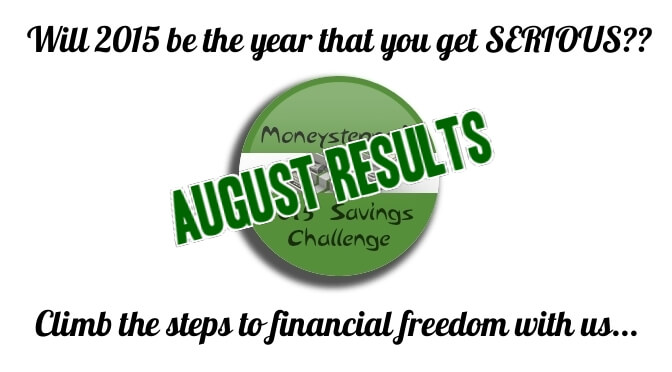 August was a pretty interesting month in the global stock markets wasn’t it? Even if you are our “textbook passive investor” you’d have done well to avoid the news. Well, today we have the results for August, and we show you the drastic action we’ve taken as a result of the market crash. What’s more – we recommend that you take the same action…Read on…!

What’s been going on in August?

Following a busy few months, August was a bit of a kickback month for my wife and I, and we saw our expenses fall as a result. But, more of that later.

August brought around 3-4 weekends “chilling” and one competiting in a cycling “sportive” – a 52 mile race. However, due to my friend’s and my blindness, we managed to miss a couple of directions and ended up riding over 60 miles. D’oh! However, this was a great experience, and we’ve signed up to another in October (which might be a bit chilly being around the hills of the Scottish border!).

At the same time, my savings rate fell due to how my annual income is structured each month, but my monthly expenses were actually the lowest of any single month this year.

So, with the market falling so much, what action did I take? After all, we can’t just sit here and do nothing, can we?

Quick, the markets are tumbling and our net worths are falling with them. It’s on every front page of every newspaper. I better sit up and listen and do something about it! Yes, true. I’m going to do the following three things as a result:

Obviously the delivery of the above is a bit tongue in cheek, but it’s exactly what I’ve actually done, and I hope all the other members of the challenge will join me in doing the same!

So, let’s have a look around the houses and see if the markets had the same impact on all of you…

In August, we noted the following:

Overall, the average (mean) for everyone who submitted their results in August was: 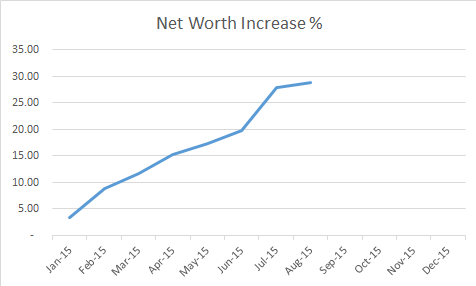 Which, I’m pleased to say, means that we continue to achieve the impressive feat of the challenge’s average net worth going up in EVERY SINGLE MONTH.

So, as a whole, keep going everyone – you are doing incredibly well. Don’t panic because of falls in the market, just keeping working hard! I can see that you have been because even with those global market shakes in August, you’ve kept up that average savings rate, and even managed to increase your average net worth by almost 1% in the month.

So, like every month, now it’s time to get personal…

Below you will find the results for everyone with a very brief comment by myself. If you are not happy with the comments, please send me an email and I can change/delete then…

When you make your submissions, the comments you add really help and they are getting better every month. Hopefully, you are finding some value from our personal exchanges resulting from your comments, so please carry on adding them!!

I’m not sure how much the “group system” is adding, and with so many non-submissions, I’m just going to report everyone who has submitted their results and will focus on these people.

All results are ordered by the net worth goal in descending order of Net Worth YTD Comparison. This doesn’t necessarily indicate how well people are doing relative to each other because some people have been more ambitious in their goals that other. But, we probably shouldn’t care anyway, as that just makes it a game of “keeping up with the Joneses”. Be the best you can be! The end…

Cath D – Top of the table Cath. Cath’s net worth actually fell ever so slightly in August, but she was able to maintain the same savings rate. Keeping that savings rate high is more important than ever in the tough months, so well done Cath! However, with the Q3 goal revaluation coming up, I’m sure that we are going to have to bump up that net worth goal again to keep you motivated in Q4.

Weenie – Weenie has noticed a fairly sizeable jump in her net worth, as she managed to pay off her car loan! Good work Weenie – always nice to get rid of that consumer (bad) debt. In addition to that she’s still achieving a 50% savings rate for the year to date – and all round impressive month!

Philippa M – Philippa updated her pension figures since starting a new job earlier in the year and maximising her contributions to her matched company pension. This led to a fairly sizeable jump in net worth result, as she hadn’t been recording this in the past few months. On top of this, Philippa has also noted that she’s cut down on discretionary expenditure after she noticed “clothing costs” building up in July – ahhh, the power of the budget!!

Pete M – Pete managed to improve his working income in the month in order to more than offset decreases in his net worth as a result of tumbling markets and a cheeky overspend on holiday! Work hard, play hard personified!! 🙂

Jeany B – Another example of hard work outperforming the falling markets. Jeany B worked overtime most days in August and due to that, and her husband’s bonus cheque coming in this month, she was able to mitigate a lot of the falls in the market and stay an impressive 20% ahead of her target for net worth growth. Also, with a savings rate way above her goal, I see a nice revaluation and final push to make 2015 the best year ever financially for Jeany B.

Michael S – Michael took up the August Mini Challenge with avengence, knocking a whopping 30% off his TV/Broadband deal after only a 5 minute chat on the phone. All power to you Michael. However, the stock market decline hit Michael’s net worth, which took a bit of a dip in the month (but not big enough to put him behind his goals)!

Elle M – A small fall from the previous month for Elle, but due to the consistent hard work so far this year, she is still ahead of her net worth goal for the year. Keep it up Elle!

Tom B – Whilst the markets tumbled, the EUR actually strengthened against GBP and therefore Tom B’s European investments appreciated nicely. However, his 49% savings rate was an equally important factor, which has actually boosted Tom’s net worth growth to over 20% – more than his goal for the entire year. You know what that means? 1) A good pat on the back, 2) Goal revaluation for Q4…! 🙂

Mariane – A tough month for Mariane with some unexpected bills impacting her savings rate, and the stock market decline hitting her net worth. However, it’s testament to Mariane’s continued and consistent effort in this challenge that she remains on course with her goals for net worth, and still ahead of her goals in her savings rate. Time to put August behind you Mariane, learn anything you can from what happened and get ready to kick September’s ass!!

Vawt – A similar story to most this month – kept up the savings rate, but the net worth took a bit of a dip from the market tumble. Hopefully for Vawt, and for you, having this group and reporting each month will let you know that you are in the same boat as everyone else in the challenge so not to panic!

Mr Zombie – After a two month hiatus, Mr Zombie rejoins us – great to have you back man! Mr Zombie sums it up succinctly in his comments: “August was a bit of a b@st@rd in the markets” – indeed it was. But with a savings rate of pushing 60%, those falling markets are always going to be offset by your hardwork. Good stuff Mr Z!

C – The falling markets mean that C has fallen behind her net worth goal. Disaster? Well, much less of a disaster when you notice that due to hard work and a 50% savings rate, C has increased her net worth by 93% so far this year. Keep pushing C – let’s see if you can break “the ton” in September!

Lynx – Lynx noticed a savings rate fall in August as she was investing more into her garden business. Lynx, this shouldn’t affect your savings rate (or net worth), if you think the business is profitable. Go to the Moneystepper Savings Challenge Podcasts 10 and Podcast 21 for an explanation of why…

Nigel W – A triple whammy of reduced income, major DIY and annual holiday has hit Nigel’s net worth – but all was expected and planned for, and a revaluation of his property has helped keep the net worth up from prior months. Nice term used in Nigel’s comments which I wish I’d read before wondering if I should refer to hit as “troubled markets”, “stock market tumbles”, “stock market shakes”, etc. He’s coined the rather charming term “the mini crashette”. I like it.

Matt S – Matt’s net worth and savings rate both fell in August, but for commendable reasons as he visited Guatemala to volunteer at a school for indigenous children and he aims to pay down the debt over the next few months.

Captain Cash – Mr CC has a fairly large chunk of his net worth in the markets, so was probably hit as hard as anyone else by the recent “mini crashette” – thanks Nigel. However, with a savings rate of over 70%, I imagine that should bounce make before the end of the year. Keep pushing Mr. CC!!

So, overall, we’ve managed to survive the global market corrections from August. The markets are still looking shaky going into September, so it’s important that we stick together in the challenge and all keep working hard with our income and cutting back on expenses to help get us to our goals by year end.

Next month will be the final round of goal re-evaluation for the year, and I hope to have one-to-one discussions with all of you to see what changes we still need to make to allow the Savings Challenge to be the most useful resource it can for you.

But, until then, keep saving, keep investing, keep tracking and keep submitting. That way, we’ll hit those goals and make sure that 2015 was your best financial year to date.