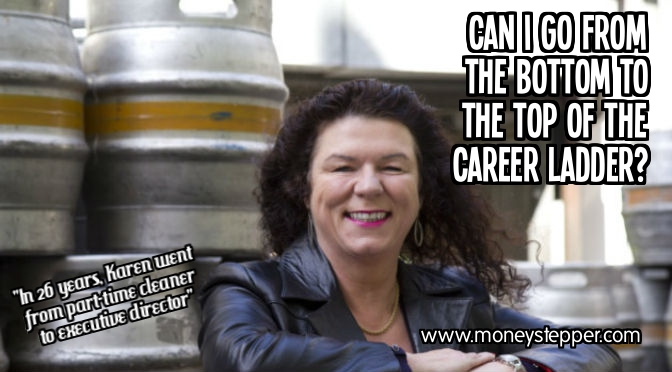 Karen Hester has made the news in the past week by becoming the first female director of the board at Suffolk based brewer Adnams. What was so special about her story? Well, she started at Adnams back in 1988 as a part-time cleaner. This made me think, how hard is climbing the career ladder? How hard is it to get to the very top, starting right at the bottom?

Is Karen a one-off?

Karen’s story is very impressive indeed. In April 2015, she is due to formally take up her role as an executive director on Adnams’ main board. She will be responsible for the operations of the Adnams brewery, distillery, hotels, pubs and shops.

She joined the company way back in 1988 as a part-time cleaner, to support her two young children. As the years went by, she progressed through the ranks, from cleaner, to procurement clerk, to transport clerk (when she became a single parent,), to transport manager, to head of logistics in 2000, to customer services director. She then returned to college part time to gain a Diploma in Management.

From this role, she slowly added more responsibilities to her remit, kept climbing the career ladder which culminated in the promotion to the board. “If I can go from being a cleaner to a director on the main board of a company then, let’s face it, there is hope for everybody”.

An inspiration, I’m sure you will agree. Starting at a company at the bottom and rising to the very top is very rare indeed. But, are there any other examples out there where people have done similar things? In short, yes, there are. Here are 10 stories to get you thinking:

They climbed the career ladder, so can you. But how?

Obviously none of these people went from shelf-stacker or cleaner to CEO overnight. Each were at the company for 20+ years before they progressed their career to allow them to get into their role. Therefore, the characteristics that all of these people share are determination, the hunger to succeed over the long term and loyalty to the company.

However, here are ten more specific tips that will help you climb the career ladder as quickly as possible:

They did it, and so can you. All it takes is hard work, enthusiasm and a certain level of longevity to climb the career ladder. Follow the above tips closely, and it is likely that you will start progressing up the ranks like these inspirations have before you.