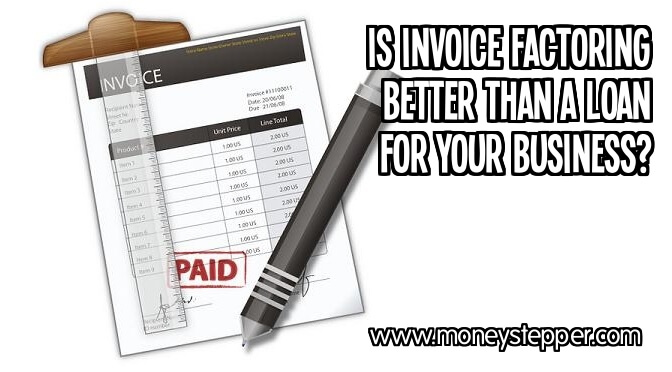 Many entrepreneurs who find themselves in need of an increased cash flow begin by considering traditional lending options, foremost among them business loans. However, depending on your business and your cash flow needs, invoice discounting might be better than a loan for your business.

Business loans are offered by both banks and independent bodies, but all turn on the same fundamental concept: a fixed amount of money is lent to the business owner for a stated period, with the caveat that it’s repaid in certain amounts on a regular basis.

Since the financial crash of 2007, however, financial entities have been increasingly strict with regards to the borrowers they’re willing to lend to. As a result, a large number of business owner have turned to invoice discounting as a suitable alternative. Invoice discounting is a form of asset-based lending. It works by awarding capital against a business’ outstanding invoices.

If your business is in need of a cash boost, and you’re taking the time to consider your options, here’s a quick breakdown to help you decide which avenue would work best for you.

Both business loans and discounting award money to business owners in need of capital; however, this money comes from very different sources. When you borrow from a bank or a loan company, the capital you’re awarded belongs entirely to them. With invoice discounting, on the other hand, you’re drawing money from a source that is already essentially yours.

This money is specifically levied against your outstanding invoices, which means the financier is simply advancing the delivery of the funds you’re owed. As a result, bank loans tend to be better for those in need of cash, whilst discounting is preferable for those who simply need cash more quickly than they’re likely to get it.

Invoice discounting has a real advantage over bank loans with regards to the collateral required to finalise the agreement between the parties. Banks and independent loan companies generally require greater security, as the risk they run is greater. This means that entrepreneurs who are looking to borrow from them will often have to secure their loan against business or personal assets, such as equipment, machinery, or perhaps even their home.

With invoice discounting, on the other hand, the collateral is built into the agreement. The money that is lent is a percentage of the value of an existing invoice, and it is this that acts as security. This means that invoice discounting poses a much lower risk for those that it’s available to.

The cost of a bank loan is essentially the interest that’s charged on the amount that business owners borrow. Although these rates vary between lenders, most are around 9.9 per cent, charged across the duration of the loan. High-risk businesses are likely to be charged more as they pose a greater risk of defaulting.

Don’t run the risk of loaning: if you’re in need of funds, consider invoice discounting from a company found through Touch Financial to meet your borrowing needs instead.