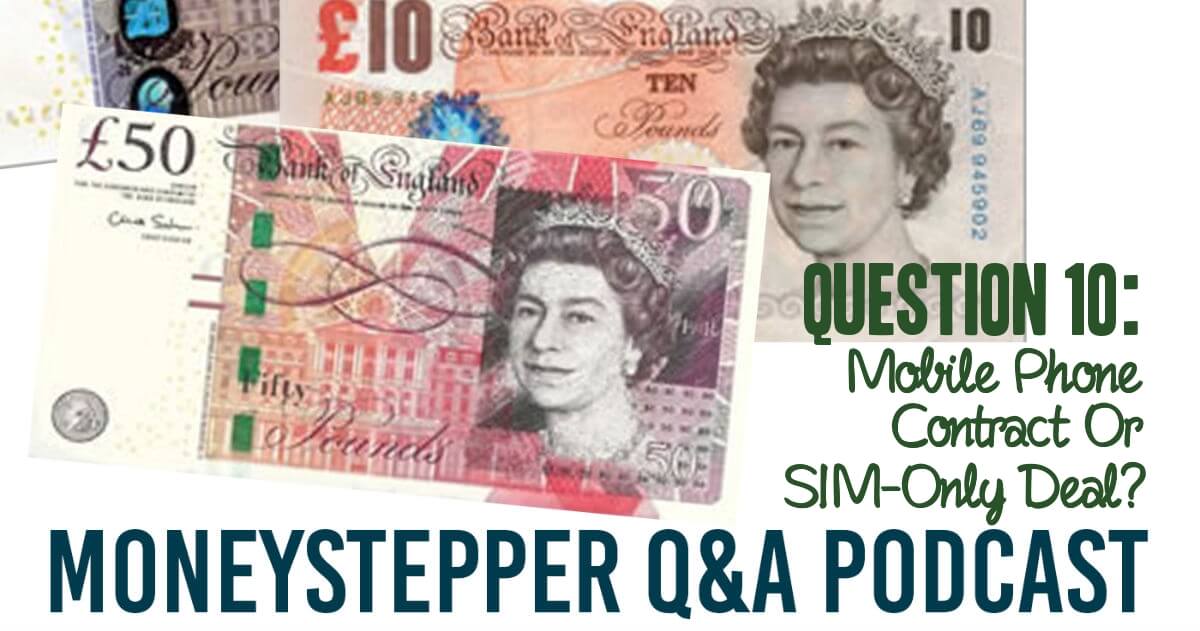 Bryony asks: “My contract has just expired on my old mobile phone and I want a new smartphone. I’m thinking about getting an Apple iPhone 5s. Should I get this on my upgrade, or are there any cheaper options?”

My contract has just expired on my old mobile phone and I want a new smartphone. I’m thinking about getting an Apple iPhone 5s. Should I get this as an upgrade on my mobile phone contract or should I get a SIM only deal?

Get away from that upgrade button and listen carefully for the next 5 minutes. Okay, maybe that was a bit dramatic. But, in my opinion, mobile phone contracts are one of the biggest wastes of money possible.

Let me demonstrate this through your own personal example. Say you were to go with the provider O2, and you wanted a iphone 16gb 5s, as you said in your question.

I’m going to take a fairly standard tariff for this illustration and I’m going to say that you sign up to a 1gb of 4G data, unlimited texts and calls. The cheapest contract deal on o2 is to get this phone and contract over 24 months for £37.50 per month and nothing up front.

As I say, this is a VERY typical deal for UK phone users. It amounts to £900 spent in total in 2 years.

But, what about the alternative of SIM only. This is a service where you buy your own mobile phone upfront, you get a free SIM from the provider and pay a fixed amount each month, but where you don’t need to sign a contract.

Firstly, let’s look at the price of buying the phone. The same iPhone 16gb 5s can be purchased from Amazon for £299 new. If you are willing to go second hand, and I can’t see why you shouldn’t be, you can get a perfectly functional “very good condition” phone for only £205.

Then, you need a SIM card. Well, let’s look at the SIM only provider, giffgaff. They have a SIM where you can get what they call “goodybags” but it’s effectively a month’s worth of calls, texts and data. A monthly pack of 1GB of 4g data, unlimited texts and 500 minutes of calls is £12 per month. When you compare that to the contract equivalent, the only difference is that you get unlimited calls on the contract, but only 500 minutes a month on the SIM only. However, you do get free calls to anyone else on giffgaff. Therefore, as long as you are using less than 500 minutes of calls to non-giffgaff numbers, which with whatsapp and facetime and skype, most people probably are, then you are gold.

And what’s the kicker? Why did I choose O2 and giffgaff. Because they are the same! It’s the same company – giffgaff is simply a brand of O2. They use the same network and they are part of the same group.

A massive benefit of the SIM only over the contract is that you are not locked into anything. In 2012, I was on a contract with O2 with 6 months left when I left the country. I was given two options – carry on paying until the end of the contract OR pay all the amount left on the contract when I left the country – either way I was tied in and screwed. The freedom you get with SIM only is a huge benefit: you can change your phone, you can change your usage month-on-month (for example I work abroad for 2 months a year and I simply don’t get my goodybags in those months, so my monthly costs drop to £0 – that wouldn’t be possible with the contract).

Are There Any Pros To The Mobile Phone Contract Option?

But, what are the arguments against the SIM only option? There must be some downsides, right? Well, we’ve already discussed what happens when you use lots of minutes – although you can get unlimited minutes for only £3 more a month if you need them.


Some people may argue about the time value of money, and how with the O2 contract, you get to spread the cost of buying the phone over 24 months, whereas with giffgaff you have to pay it all upfront.

Well, good thinking, that is true. But, you are paying a price to do that. You see, if you spread that £299 which you spend up front with the giffgaff option over 2 years at 5%, it comes to £14 – not a patch on the £400 difference we’ve shown in our example.

Others may argue that you are safe in the contract because your prices can’t go up, but with the SIM only they could. Well, yes, they could, and with inflation, they probably will. However, they would need to go up by a monumental amount to make the contract a better deal. For example, even if giffgaff increased their rather by 6% every single month over the period (so it was £45 per month at the end of the 2 years, instead of the current £12 per month), then it would still be cheaper than the contract. And, unless with have some Mugabe style hyperinflation round the corner, that isn’t happening!

So, it’s a no-brainer for me Bryony. SIM only wins hands down. As an added bonus, if you go to giffgaff through the banner below, you’ll earn a £5 free credit when you order your SIM. Win-win!

The Theme to the Moneystepper Q&A podcast is taken from the single “California” by The Dolan Springs. You can download the full California EP for free here.