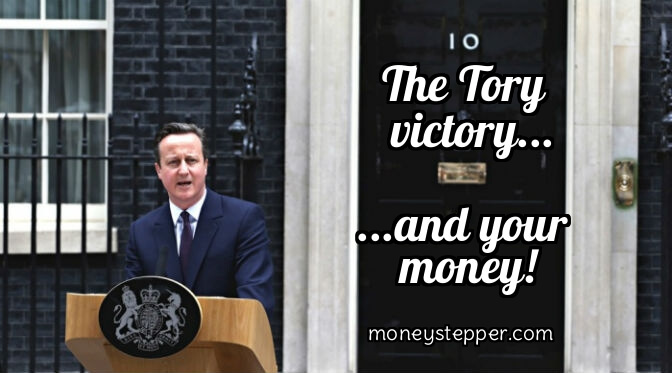 With the Conservative Party now in government, there are a number of financial policies that the party set out in their manifestos that could impact you. Today, we look at what the Tory victory means for your finances.

Here are the main policies that could impact you over the next 5 years.

The current, personal inheritance tax threshold is £325,000 (combined with a spouse up to £650k), affecting around 6% of the population. The Conservatives are set to introduce an additional personal allowance of £175,000 against main properties. Combining this with a spouse and your current personal allowance means you could pass on a home up to £1million to a beneficiary, completely free of IHT.

The minimum wage should also rise to around £8 an hour.

From this autumn, a new Help to Buy ISA will be introduced to help first-time buyers purchase their first home. This will top up £50 for every £200 saved towards a first time home deposit (up to a maximum top up of £3,000).

The Help to buy scheme, which allows buyers to raise a 5% deposit in exchange for a five-year interest-free loan of up to 20% of the home value was set to be scrapped next year. It will now be extended until 2020.

The Conservatives are also set to extend the controversial Right to Buy scheme. This will allow housing association tenants to purchase their homes at a reduced cost. It has been scorned in the past as it encourages investors to purchase low-cost homes as rental properties.

The Triple Lock State Pension formula means the state pension will continue to rise every year, either with inflation, earnings or at 2.5 per cent – whichever is highest.

Pensioner benefits such as the Winter Fuel Allowance, free bus passes and free TV licenses will not be means tested and will be available to all.

Also set to remain will be the recent pension freedoms that came into effect on 6 April 2015. The new rules give complete flexibility to the way pensioners access their funds.

18-21-year-olds will be massively affected as the Conservatives are set to remove Housing Benefit and Job Seekers Allowance for anyone in this age bracket. It will be replaced with a 6 month Youth Allowance, before being offered a compulsory apprenticeship, traineeship or community work.

Weekly childcare for children aged three to four is set to be doubled to 30 hours, the equivalent of around £5,000 per year.

Labour had pledged to double paid paternity leave to four weeks, but under the Conservatives it will remain at two weeks.

The Conservatives have pledge to freeze rail fares for five years, saving commuters an average of £400. Annual rises for commuter tickets will also be capped in line with inflation.

After raising tuition fees to £9,000 a year at the start of their last tenure, the Conservatives have no plans in place to reduce this figure. They have also not ruled out the chances that this could rise in the future.

After introducing the much-derided bedroom tax at the start of their last campaign – where council or housing association tenants saw their housing benefits slashed if they were deemed to have spare bedrooms available – the Liberal Democrats also sought to introduce a Mansion Tax.

The Mansion Tax would have been a yearly tax on homes worth over £2million and would have affected just 0.5% of properties in the UK.

The Conservatives will keep the Bedroom Tax, yet scrap the Mansion Tax.

This creation of this article was supported by Ryan Smith, part of the content development team at Local Financial Advice, who aim to make sure you’ve got the knowledge to make the most out of your financial future and helps connect people with independent financial advisors in their local area, to help them achieve their financial goals.