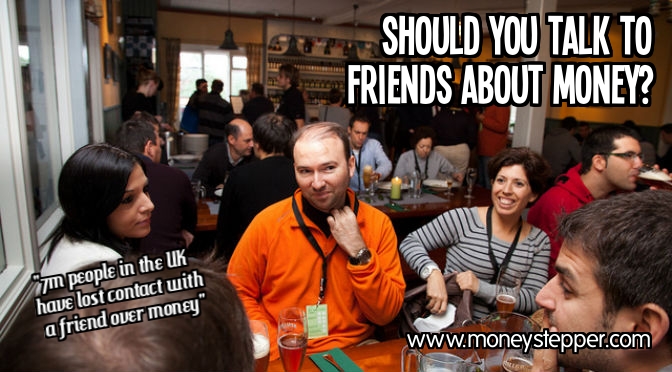 Personal finance seems to be a taboo subject amongst friends. Often, people don’t like talking about money, about debt, about salaries, or anything else related to their finances. But should people worry about being open about their finances? Should you talk to friends about money?

Yes. You 100% should take to friends about money and finances. Article over. Next.

Okay, maybe it’s not quite so simple.

The dangers of not talking about money with friends

I’ve seen many times in my life, people falling out over money and finances. But, I’ve never seen anyone stop being friends because they talked about their finances. Don’t treat money as a taboo subject. This is an important thing to understand. It’s not talking about money which loses you friends, it’s not talking about it when you should be.

According to research from Scottish Friendly, 7 million people in the UK say that they have lost contact with a friend because of a financial dispute, with 28% of people between the age of 24 and 35 admitting to losing friends over money.

Let’s have a guess at what these “money issues” might be. I would be shocked if any more than 1% of them were due to people having different opinions on how much they should put in their pension. Or what their preference was between the snowball and avalanche methods of debt repayment.

No, much more likely is that friend A asks friend B for £x to help them out of a pickle. Friend B doesn’t want to pry into friend A’s problem (because talking about finances just isn’t done). They lend them £x because they want to be a good friend. £x doesn’t solve the underlying problem that friend A has and they can’t pay friend B back.

However, friend A still doesn’t want to talk about the underlying financial problems, so they simply make excuses or avoid friend B. All of a sudden, friend A and friend B are no longer friends; they are simply person A and person B and form part of the 7 million people in this statistic.

It’s a sad story, but I would be very surprised if you have never come across it. I personally believe that over 80% of these 7 million people would have a similar story.

In my experience, this seems to be more of a problem among men (maybe due to their more closed personas) and this is supported by the study which shows that 30% more men admit to losing friends due to finances than women.

Why not talk about it?

Would it not be better if friend A went to friend B and explained why they were struggling with their finances? Friend B is a friend. He would want to help in a more productive way than just throwing £x at the problem. They may be able to offer advice to solve the underlying problem. If not, they may know someone who could.

What I don’t understand is why should it be any difference with finances? Imagine the same situation, but friend A needed his shower fixed. He would quickly ask friend B what he thought or if friend B knew a plumber or electrician who could help.

I don’t see why finances are taboo amongst friends. It shouldn’t be. And the only way to stop it is to talk. Talk to friends about money and finances. Have open discussions. Don’t be afraid to ask questions and answer honestly. I’m sure it would reduce that 7 million number quite significantly.

If the only solution is friend A lending money to friend B, then the previously linked Scottish Friendly article actually includes has some very good advice of how to manage the situation to ensure that you don’t lose a friend:

The second piece of advice here is very good and something that we discuss in our alternatives to payday loans article. You can find that lending £50 off a mate and paying him back £52 a month later may be hugely beneficial for both parties (you get a deal much better than a payday loan and your friend gets a 4% monthly interest rate (over 50% APR) which is much better than they would earn in the bank or even through investments in stocks or property.

Just make sure everything is agreed up front!

Talk to friends about money, people. Be open and honest. Finances are just another topic of conversation (like the football!) and you should not be worried about being open with your friends. After all, they are your friends. That is what they are there for!

Note: this post was written by moneystepper following agreement with Scottish Friendly that their research would be referenced in the article