April has been pretty darn good in the world of moneystepper. Out of my twelve goals this month, I have beaten my monthly target in eleven of them (and the last one I wasn’t expecting to succeed in as progress shall be made later in the year). 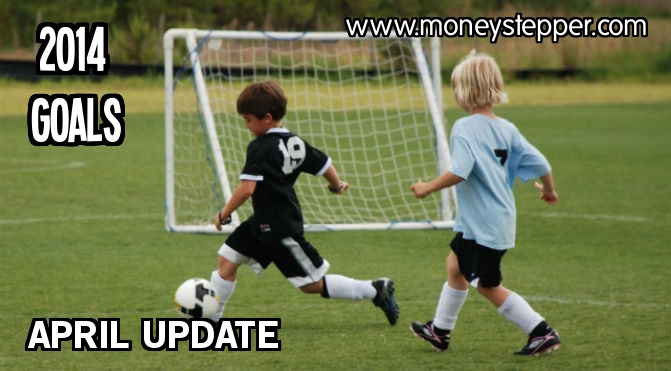 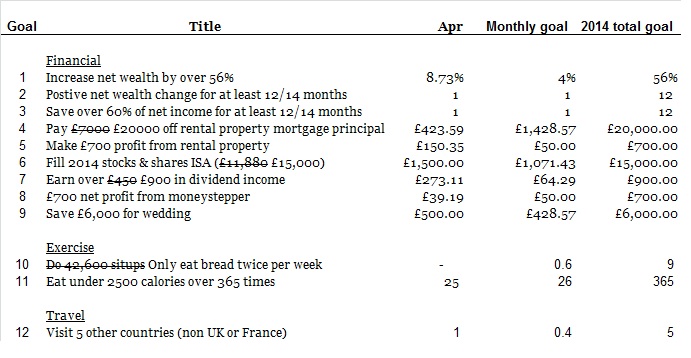 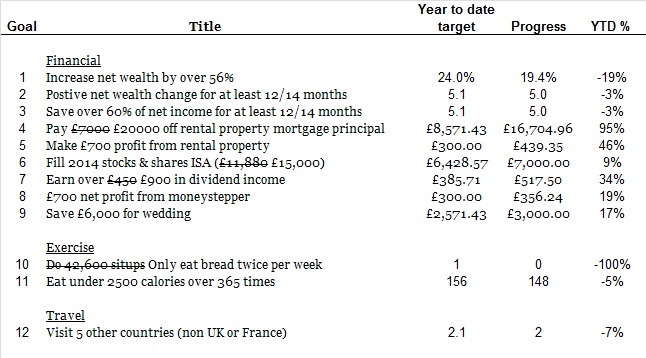 Goal 1 – What a monster! The 8.73% increase in the month was due to our French taxes. The tax system here means that you pay your taxes for the financial year in the following September. However, with us not being overly familiar with the ins and outs of the tax system, we had estimated what our tax return would be. In April, I discovered what my liability is for the 2013 calendar year (to be paid in September 2014), which was less than I had previously accounted for. Therefore, this increase was slightly artificial, but was a nice welcome increase all the same!

Goal 7 – As promised in March’s update, I have revised this goal upward in April. Not just by a little bit, but by half. This is due to the increase in the ISA allowance for the 2014/15 financial year allowing me to invest more in dividend paying ETFs. Most of my earned dividend from Q1, which was earned in March, actually hit my accounts in April due to a delay with my broker. £273 in dividend income in one month was a nice figure to see on the spreadsheet!

Goal 12 – And I got to travel in the month. My wonderful fiancée and I went back to Roquebrune Cap Martin on the French Riveria to celebrate it being one year since we got engaged. However, with us being so close to Italy, it seemed rude not to hop on a train! A beautiful day of Italian markets, fresh mozzarella, prosecco (€5 from the market), eating on the beach and having a 5-course meal in the evening made for a wonderful day trip.

Each month I write about my 3 failures. However, this month I’m struggling to find three! Instead, I’ll talk about one failure and one change.

Goal 4 – This is a strange one. My mortgage on this property is currently in the period which incurs an early repayment charge. In January, I made a contribution to the mortgage which I did not record against this goal. I have decided to include this and re-base my goal. This means that I’m currently 95% ahead in this goal, but this should come down to the goal amount as each monthly payment goes in.

Goal 10 – I just can’t get the health goal going. Being in France with all this delicious food is proving too hard. I tried to not eat bread, but with us having many visitors in April, the bread, cheese and wine doth flow!

So, how did you get on with your goals in April? I would love to hear about them.