After increases in my net worth of 9% and 4% in April and May respectively, I was expecting some pull back in June 2014. Luckily, no such thing happened. In fact, it was quite the opposite…

In June 2014, out of my twelve goals this month, I have beaten my monthly target in most of them. For the majority of the “monthly” fails, its usually because I am significantly ahead in the annual goal already and I’ve purposely taken my foot off the pedal to focus on other goals. 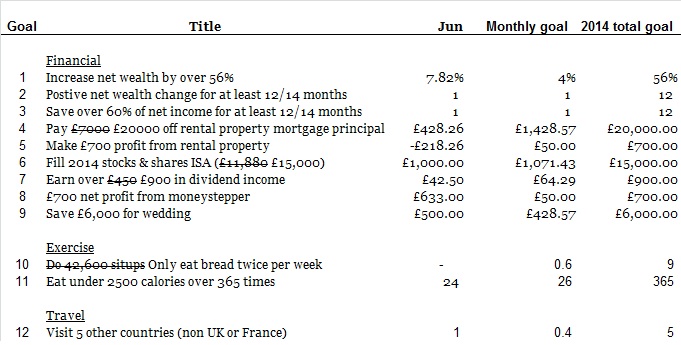 Overall, for the “year to date” (Nov – June). The YTD% shows how far ahead or behind I am compared to my pro-rata expectation for the period of Nov to June: 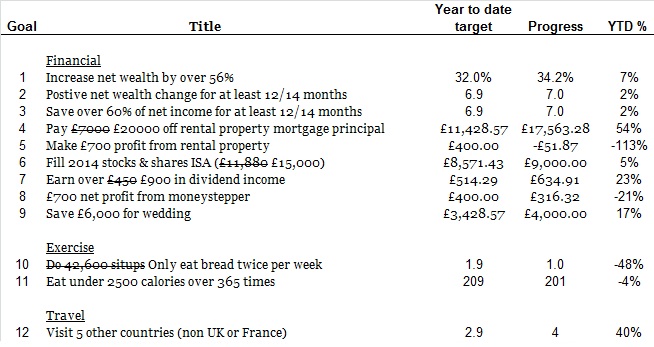 Goal 1 – After an 8% increase in April and a 4% increase in May, I’m absolutely delighted to have made it a hatrick of positive months. In June, my net wealth has increased by another 7.82%, moving my yearly progress above the YTD target for the first time since starting these goals. We the power of compound interest on my side, the goal of a 56% annual increase in my net worth should now be very much achievable. The month of June was particularly pleasing as my investment returns mirrored that of the UK markets, being down around 1.5% for the month. Side income really helped boost this figure this month and should hopefully continue into the coming months.

Goal 3 – As well as my additional income noted in Goal 1, my spending was also pretty minimal in June given that I basically had three separate holidays in the month. However, that is the beauty of reward points from quidco, hotels.com and credit cards! In total, my savings rate for June was 74% of my net income – one of the best months I have ever had.

Goal 8 – Whilst still a fail for the year, my profit from moneystepper for the month has got me back on track. This figure is actually the wage which I have paid myself from the company (and intend to do so each month going forward) after incorporating moneystepper as a LLC at the start of June. I intend to pay myself this wage every month going forward, and hence I should be able to obliterate this objective over the coming 6 months.

Goal 12 – And another month travelling. This time, it was four nights in Corsica, which is the most beautiful place I have ever been to. So much so that its now top of our list of places to go for our honeymoon next year – yet to be confirmed!

Despite such a strong month financially, there were a couple of setbacks…

Goal 5 – A few additional costs regarding the previously discussed lease extension have meant that this month’s profits have taken a hit. So much so, that the rental property is now yielding very slight negative returns for the year. However, I hope that we can turn this back around in the last months of the year and avoid too much unexpected expenditure.

Goal 10 – This was a ridiculous goal, which I’m already giving up on. Whilst I know the health benefits to not eating bread, it is almost impossible to not do so when living in the South of France and loving bread as much as I do!! I think this may be scrapped after next month and not replaced. I guess this is one FAIL which will have to be posted in my year-end goals! Oh, the shame!

Let me know how you got on with your goals in June? I would love to hear about them. Send me a link to your goals post in the comments section if you have a blog as I love reading other people’s progress. Alternatively, if you don’t have a PF blog, just let me know in the comments how you are getting on…