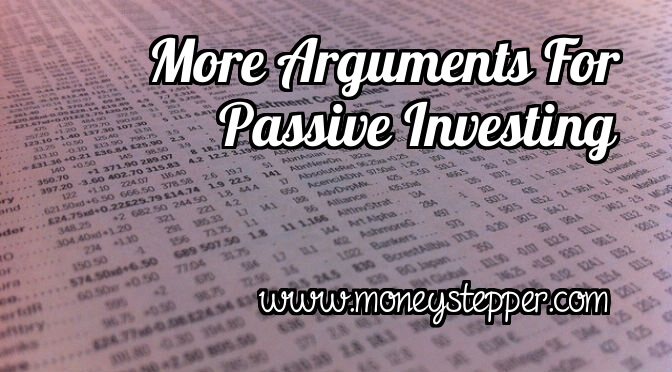 As we’ve said repeatedly in the past, we strongly agree with the arguments for passive investing. We summarise this in the following articles. If you are currently an active investor (either by picking your own stocks, or by investing in active mutual funds), I’d recommend that you read these Moneystepper articles and listen to these podcasts straight away:

Anyway, back to Pete’s podcast episode and the arguments for passive investing. After giving the celebrity (and “top performing”) fund managers the slating that I think they deserve, he also (very diplomatically) tries to present the arguments for these funds and their managers.

In doing so (in his things to do section), where Pete is really having to look hard for arguments in favour of going with active funds, he suggests to research funds through MorningStar to filter the 4-star and 5-star funds.

This is where it got me thinking. Immediately, the classic “past performance isn’t a predictor of future results” mantra came to mind.

Pete presents a fact at the beginning of the podcast that less than 5% of active fund managers were able to stay in the top half of the performance tables for 5 years in a row.

Interestingly, if everything was left to pure chance (the monkey throwing darts to pick stocks), a randomly selected fund manager would have a 50% chance of finishing in the top half. For five years in a row, the probability would be 50%^5 = 3.1%.

Therefore, you can see that there isn’t a proportion much higher than we would expect if everyone was equal.

My takeaway from this is this you are going to be VERY lucky to be able to find that 1-2% of managers that will finish in the top half on a consistent basis due to anything beyond chance.

As a result of this podcast, I did a little more research and came across another more recent study that I found fascinating. The information comes from another S&P study and provides even more arguments for passive investing:

Therefore, fund managers may be actually doing worse than random! There may be a couple of theories to explain why the actual % is less than the random case:

Arguments For Passive Investing – A Conclusion

Nothing here tells me anything new. The arguments for passive investing tend to come from the downfalls of active investing: that it’s is a losing game, other than for the stock brokers and fund managers who get paid huge salaries and bonuses as a result of our investments.

So, stop buying yachts and supercars for these fund managers (Bill Gross, who ran the Pimco Income Fund, was reportedly paid a $290m bonus in 2013). Instead, it might be a better idea to invest in low-fee market tracking EFTs and funds that you can just forget about for the years, safe in the knowledge that you won’t beat the market, but you will BE the market!

Found our arguments for passive investing insightful. Then, come back on Thursday to read about what happened before I learned this lesson in a confession post: “Hi, I’m Moneystepper and I’m a TERRIBLE investor”.