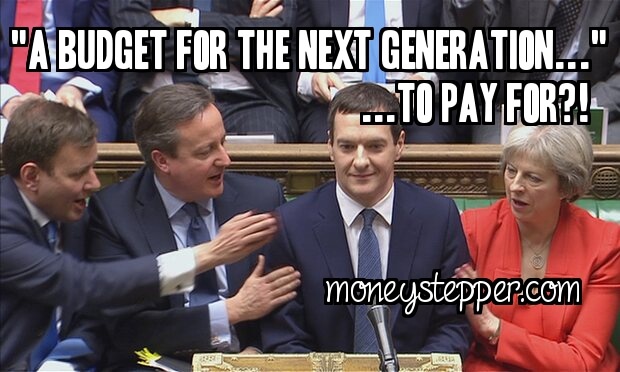 Beyond Teresa May’s choice of dress (well done to the Daily Mail for their predictably hard hitting coverage of the budget), George Osborne’s 2016 budget was jam-packed full of changes. Here’s just a few of the bigger points:

There are some interesting items in there, not least the fact that fuel duty has been frozen for the sixth year in a row. This should help motorist save cash on their fuel, and combined with following the tips from the AA’s guide to saving money on running a car, should help you keep your motor costs down.

The point that has interested me the most is the 2016 budget also concerns saving, and it’s the change in ISA limits. There have been two big changes here.

Firstly, the new “lifetime” ISA for under 40s which effectively extends the Help-To-Buy ISA to allow savers to get the 25% bonus when they purchase a house, or when they retire. This is capped at £4,000 per year. However, if the saver withdraws money from their account before they reach retirement (currently there will be an age limit of 60), they will not receive the 25% bonus.

The main impact of this change, in my opinion, will be on the ISA vs Pensions debate, and you can see very clearly why the government is doing this. Take the following example, where Joe Bloggs is going to save £5,000 of his gross salary which he plans to save towards retirement. He is a basic rate income tax payer. Will ignore annual returns in both scenarios as they’ll be identical.

Therefore, you can see that with the “Lifetime ISA”, the government receives a net payment in taxes of £0. If this was in a pension, the government would receive £800 in taxes, but not until Joe had retired.

So, Joe is better off with the lifetime ISA in this scenario, as it also gives him more freedom – e.g. he can access the cash without the government top-up in the short-term if there was an emergency.

This government is also better-off with the lifetime ISA. They receive £1,000 in income tax from Joe’s PAYE which they can use to balance their books in this term. The top-up payment will either come when Joe buys a house (likely to be in the next government) or when he retires in at least 20 years.

This, ladies and gentlemen, is the perfect example of “kicking the can down the round”.

The second ISA related change is that, from April 2017, ISA limits (the maximum amount you can contribute to your ISA per year) will increase to £20,000 per year. Let’s put that into context. A mere 6 years ago (at the start of the Conservative Government), the ISA limit stood at £7,200. Therefore, in 7 years, the maximum you can contribute to an ISA would have almost tripled.

But, who is this helping?

According to Santander in a 2015 survey, just 8% of those surveyed planned to utilize their full £15,000 ISA allowance. In my opinion, that 8% is a huge over-estimate of how many people actually used their full allowance. Firstly, “those surveyed” are probably people who actually have or use their ISAs in the first place. This fact probably reduces that figure by half. We also have the wording “planned to utilize”. People plan to do a lot of things, but most (especially in finance) don’t get achieved. Therefore, I would estimate (and I’d love to hear your thoughts on this guess) that the real number is something like 1-2% of the population used their full ISA allowance when it stood at £15,000.

Increasing this from £15,000 to £20,000 per year therefore only helps a tiny proportion of the population (the upper middle class) who, in reality, probably don’t really need the help financially. Additionally, I would guess that this tiny slice of the UK populous political allegiance is fairly strongly titled towards the Conservatives anyway.

So, if you are like the majority of the UK, this increase in the ISA limits probably doesn’t directly impact you. However, this doesn’t mean that you shouldn’t strive financially for it to do so.

At Moneystepper, we are focused on saving money to allow you to invest (within an ISA or otherwise) as effectively as possible so that you can achieve your financial dream.

The best ways to do this are to join The Moneystepper Savings Challenge or read our 111 Ways To Save Money On Household Bills. Then, hopefully, you can move towards being in the position where you are saving such a high percentage of your income that George Osborne’s ISA changes could be more relevant to you and your family.