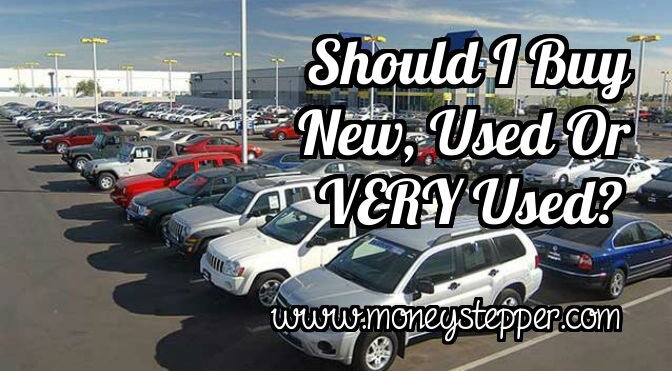 There’s an ongoing debate in financial circles between going new and used cars when buying a vehicle. I personally don’t think there’s an argument, and would suggest that everyone (unless you are already financially free) should go second hand. I explain why through some examples here.

However, I started thinking a few days ago about the difference between buying an used car and an OOOLLLLDDDD used car. Over the past ten years, there has been some great progress in making vehicles more efficient, and there are a number of incentives from national and local government which financially rewards “cleaner” cars.

Therefore, I thought I’d take a look at the question of how important is fuel efficiency when buying a car. The best way to do this is probably through a couple of examples:

A quick search on Autotrader gives these two options for someone looking to buy second hand.

We can then compare this to an older version of the SEAT Ibiza:

If you ignore all other costs, and say:

Therefore, in one year, the older car would cost £145 more in tax, and £355 more in diesel costs. So, in total, it costs £500 more per year to run the older version because it is less efficient.

Let’s imagine that our cars will last up to 100,000 miles or 15 years (whichever comes first). This means that the Seat Ibiza (2006 reg) will last us another 6 years. In that time, it will cost £3,000 more in running costs from the above calculations than buying the 2012 model. The price differential is £3,000. Looks pretty close, doesn’t it?

Let’s not forget to look at how much the car would cost from the showroom floor.

A brand new SEAT IBIZA 1.2 is currently around £12,724 (if you buy with cash). It’s important to note here that if you have to finance the car, it becomes more expensive.

It’s tough to pick a winner between buying moderately and very old for the SEAT Ibiza. But, going with old or older is clearly beneficial when compared with buying new.

Let’s take a look at a second example: the trusted Ford Fiesta.

Using the same assumptions of:

Therefore, in one year, the older car would cost £50 more in tax, and £115 more in petrol costs. So, in total, it costs £165 more per year to run the older version because it is less efficient, but it was a massive £4,500 cheaper in the first place.

It looks like the older beats the old when it comes to the Ford Focus, but not by much. However, once again, both absolutely trounce buying new!

Should I Buy A New, Used or VERY Used Car?  Other Considerations

We can see from these examples that the winner between buying a newer used car and an older version is dependent on the make and model, as some cars have seen more rapid improvements in their fuel efficiency and emissions than others.

Therefore, it’s worth running the numbers for the type of car that you wish to purchase.

However, in both of our examples (and indeed for any used car) there are some other things to think about here:

Should I Buy A New, Used or VERY Used Car? – A Conclusion

Sorry – I don’t think that there is one definitive answer. I’m pretty sure that buying used is financially better for everyone compared to buying new.

However, the age (and mileage) of the used car that you buy will depend on the make and model of the car, the change in efficiency and emissions over time, how much you can afford and a host of other variables (now including how dodgy the emissions tests and printed mpg may be!!!)…