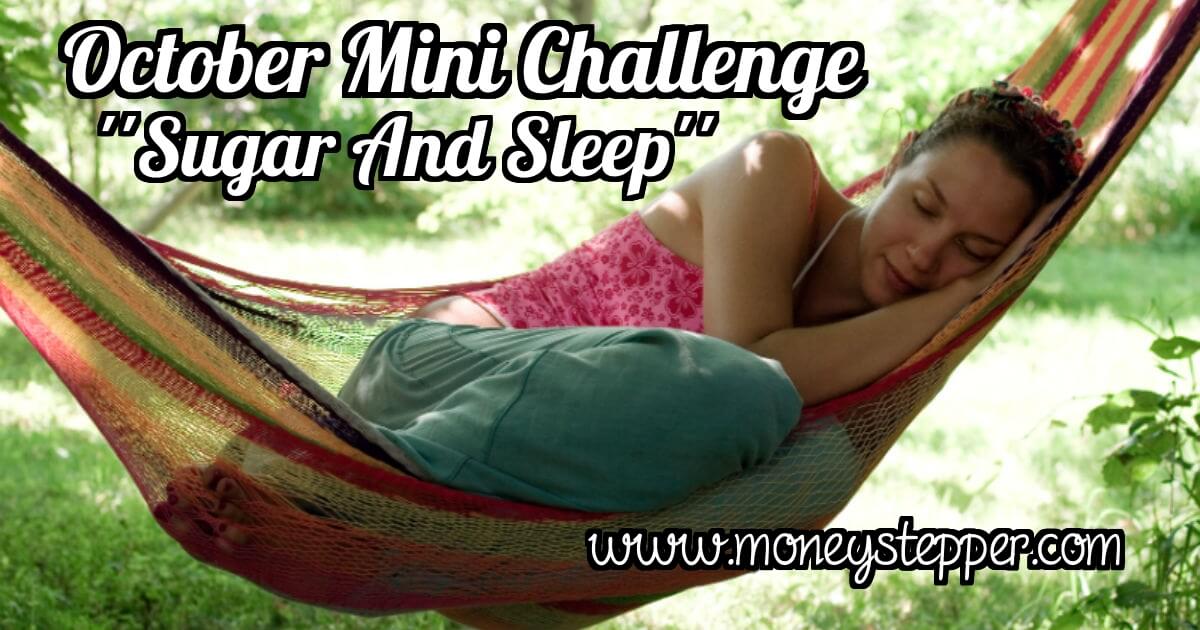 That’s right. October’s challenge is based on two things that have repeatedly come up in my listening, reading and in my personal experience in the past month or two. They are sleep and sugar.

We’re going to combine these both into one single challenge for October. As such the October mini challenge will be:

1a. To consume less than 60g of “sugars” each day; OR
1b. Consume anything with “added sugars” in at most 3 times per week.

2. Follow the following sleep rules: don’t look at any screens before bedtime, write your next day’s to-do before bed, never hit that snooze button & drink a pint of cold water as the first thing you do when you wake up.

So, you can choose either 1a or 1b as your challenge, but everyone also has to do 2. Let me explain a little more why I’ve come up with these two parts to the challenge.

Whilst dietary advice changes like the wind, one thing that seems to be a consistent given is that sugar is bad for you. There is a lot of debate around whether fructose is bad for you, and hence why we’ve let you decide on your option between 1a and 1b.

Option 1a should be chosen by people who believe that excessive sugars (whatever their source) are unhealthy. As such, these people will be attempting to keep their sugar intake down below 60g every day for the challenge.

Option 1b is for those who believe that certain sugars are healthy. Therefore, these people will be following the challenge which says that they cannot eat anything with “added sugars” more than three times a week.

Let’s look at some examples to see how hard this might be and where sugar can easily sneak into your diet. Let’s imagine that someone has the following diet:

This diet is something that a lot of people would consider to be generally “healthy” although there’s clearly elements like fizzy drinks that people know aren’t good for you. What I’m trying to say is that this diet would not be unusual as someone’s standard daily diet.

And, I think you’d agree that you’d probably be pretty hungry if this was your daily diet.

For calories, your day would break down into the following:

However, when we take a look at the sugar content, we see a very different story:

The RDA is 120g for men and 90g for women. I personally believe (and supported by a lot of medical research) that these are currently too high. However, both are blown out of the water by our diet. Even if we remove the can of coke which everyone would guess is a sugar offender, we are still left with 175g of sugar consumed in the day.

So, I challenge you to cut back on sugar, consuming less than 60g a day.

After reading the 4-hour body, I did this in August and September in an attempt to shape up a little for a cycling event I’m doing in the first weekend of October. I ran a very, very slight calorie deficit on most days, and actually gorged one day a week (usually combined with high amounts of exercise on that day). In 8 weeks, I lost 8kgs which is 17.5 pounds, and managed to slash 5 minutes off my 5km PB at the same time.

The best bit about it was that after the first horrible hump of getting myself off sugar, I felt like I had higher, and more consistent, energy levels.

So, give it a try. Cutting right back on sugar for the month is going to be tough. For 1a, what I’d suggest is that you try to do as many days as possible under the 60g target and then report at the end of the challenge saying that you succeeded on X/34 days (until 7th November – the first Saturday in November). For 1b, I’d recommend aiming for that 3 times per week (which would be three meals per week where any/all of the meal has added sugars) and recording if you go over/under and adding that in your results.

Also, for counting your sugar intake, I would highly recommend the MyFitnessPal app: very easy to use and you can enter all your foods you’ve consumed for the full day in less than a couple of minutes.

Here’s a video currently doing the rounds (in Dutch so subtitles will be useful). He only cuts out “added sugar”, so still consumes fruits, yoghurts, etc and so would probably have to do the 1b challenge. I’ll personally be doing the 1a.

Sleep is a VERY powerful (and I must say, wonderful) thing. However, it’s very different for each person. Therefore, I’m very hesitant to set a challenge of “wake up before Xam”, “get Y hours of sleep every night” or sleeping in certain ways.

However, we’ve tried to set three easy actions that will lead to better sleep for everyone. We’ve chosen these for the following reasons:

Who’s going to join the mini challenge for October?

I’m doing 1a and 2. Let me know in the comments below if you will be participating and, if so, whether you’ll be doing challenge 1a or 1b.

Can’t wait to catch up with you all later in the month to see how the challenge is effecting your daily energy levels and overall health. Let’s do this!! 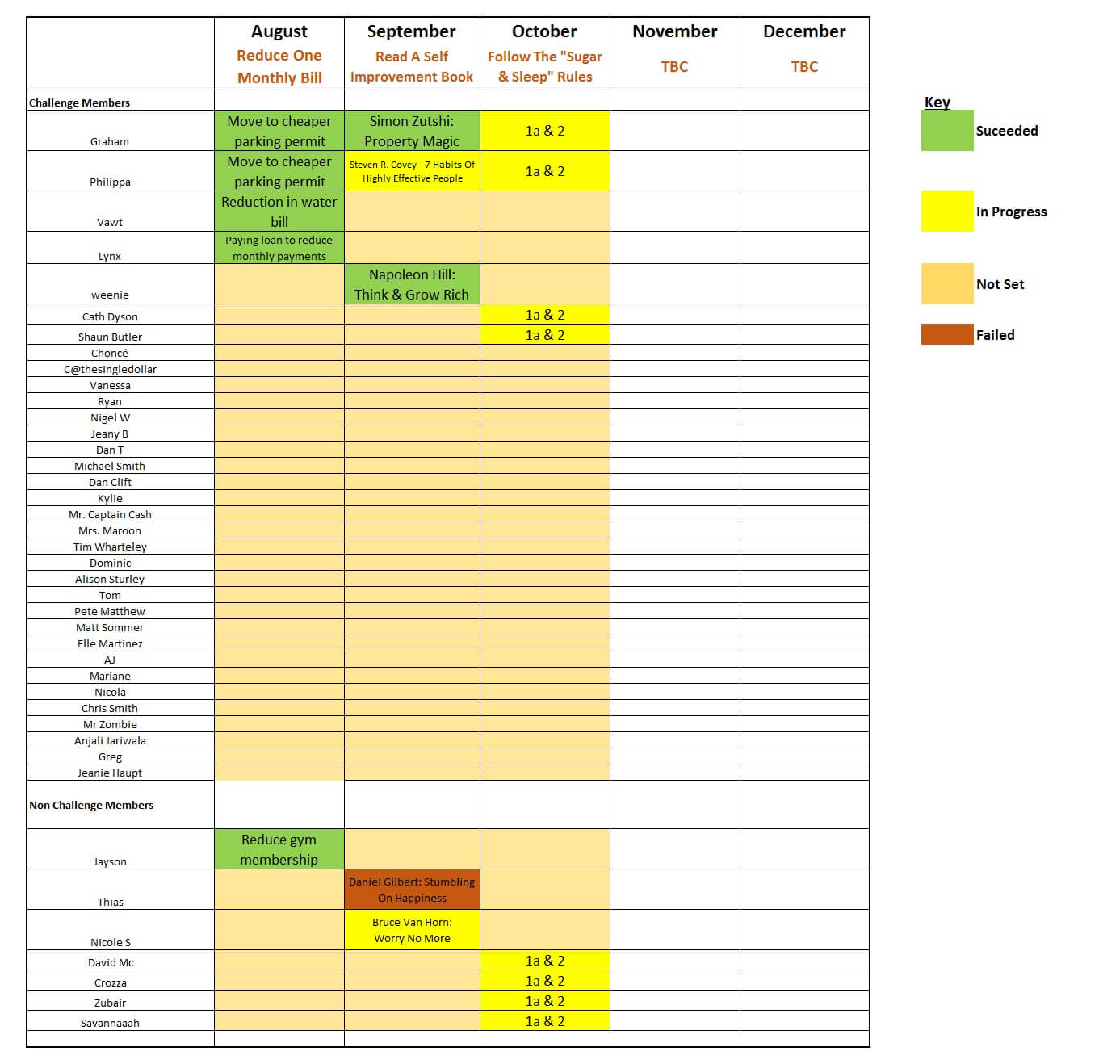