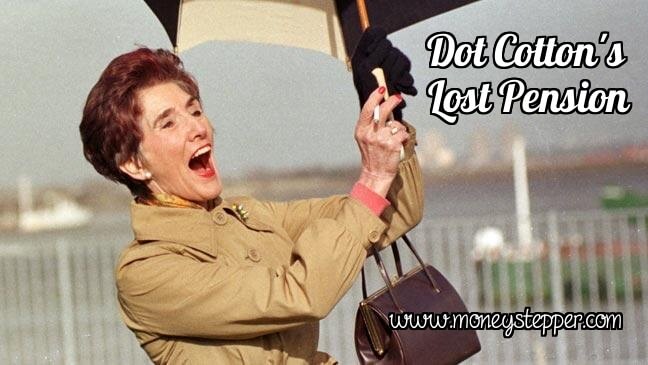 Anyone who keeps up with Eastenders is bound to know that Dot Cotton has just been sentenced to 14 months in prison for the manslaughter of her son – Nasty Nick. But whilst actress June Brown might be going on a well-deserved holiday for the next year or so, fans of the soap will be relieved to hear that this definitely isn’t the last we’ve heard of Dot – as June has to keep on working to top up her pension!

At 88, June is well above state retirement age, and has recently revealed she’s losing her eyesight too – but despite this, it doesn’t sound like the Albert Square veteran will be hanging up her keys to the laundrette anytime soon. In a recent interview, June said that due to the financial crisis, her pensions aren’t worth much – and she has to keep working as she’s worried about “being poor when (she’s) old”, a situation many of us have also found ourselves in over the last few years.

Speaking to Radio 4 last week, the actress said: “You might laugh at that and think ‘she’ll never be poor when she’s old’ but I’ve not squirreled away lots of money. I’ve had two pensions each that have gone down by 50%.”

June Brown isn’t the only celebrity that’s expressed concerns about her retirement funds. Speaking in 2012, her Eastenders colleague Larry Lamb said that his “biggest financial regret” was saving into a pension religiously throughout his whole career – which then ended up being worth very little, due to the financial turmoil.

Although these two stars have had bad experiences with their pensions, we’re not suggesting that those of us on less-than-A-list wages should forgo pension contributions by any means – on the contrary, if you’re part of the “squeezed middle”, it’s more important than ever these days to save for your retirement.

But you can certainly be smart over what you do with your pension fund – make sure it’s not invested in anything too risky: we all love the idea of huge growth, but there’s sometimes just as much chance of complete collapse.

Secondly, make sure you’re getting the best possible deal in terms of fees and charges, so that valuable pounds aren’t getting eaten up every year – if you’re able to change providers to benefit from more competitive offers, do so.

A good summary of how to do this can be found in our most recent podcast: Session 22 – Why Choose Passive Investing.

Could An Annuity Still Be Right For You?

Finally, once the time comes to retire it can be tempting to take a big chunk of your pot as a lump sum, but doing so can result in a few years of luxury living and then the following 20 on an extreme budget. One way to guarantee a fixed income for the rest of your life is still to purchase an annuity – and although the recent changes mean that you can take up to 25% of your fund tax-free before you do this, the less you take, the more your annuity will be worth.

If you want to play around with the figures to make sure you’ll have enough to live on each year it’s a good idea to find an annuity calculator – unless, like June, you relish the idea of working into your 90s to top up that pension!!