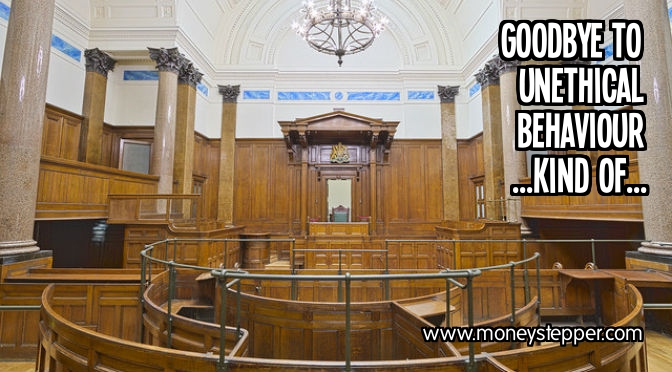 Given the extent of unethical behaviour that has been undertaken by the UK’s financial services industry, it’s likely we have all been affected at some stage. If it wasn’t the false debt collection letters or mis-sold PPI, it may have been an excessive and credit rating killing number of credit checks or 100 per cent at-risk mortgage lending.

Here, we take a look at some of most high profile unethical practices, all of which have or are well on their way to being brought to an end; some as a result of regulator intervention, some voluntarily by the lenders that instigated them in the first place and some through advancements in technology.

It goes without saying, misleading correspondence or even full on misrepresentation is a big no; it not only alienates customers, but also draws unwanted attention from the regulators. Despite this, payday loans company Wonga took it upon themselves to send out false debt collection letters to customers who had defaulted on their payments. The practice is said to have been used between 2008 and 2010, affecting some 45,000 customers who were charged an admin fee for the privilege.

This is, however, a practice that they voluntarily brought to an end, it’s also said to have cost them a staggering £10 million in compensation payouts, some four-times the amount initially agreed with regulators. Surprisingly the FCA (Financial Conduct Authority) failed to impose a fine or sanction; this was because the practice had stemmed from a time prior to its formation and was therefore seen to be outside its jurisdiction.

Wonga weren’t the only ones at it though, leading high street bank Lloyds also admitted to having used a similar practice. It’s also highly likely that this practice has been used by countless other financial institutions, but the full extent of its use is probably something we will never know.

You might not have realised, but the chances are if you applied for any type of finance through a broker just two or three years back, you would have been subjected to a tirade of credit searches. What’s the problem? You may say, well given the fact that any lender you apply with in the future will be able to see a record of any full credit searches that have previously been carried out, and a high volume of searches could be interpreted as a sign of desperation, it could hinder your chances of gaining a credit approval.

Thankfully this far from ethical practice is now coming to an end with the introduction of an innovative piece of software that’s quite frequently referred to as a ‘risk navigator’ and enables lenders/brokers to carry out a ‘soft search’ rather than a full credit check.

Plenty of people across different industries have implemented this technology, including car finance company Clearway, who use it to determine the best possible match from their panel of lenders all before a full credit check is carried out, and Barclaycard, who use it for their credit card service.

Pre financial crisis, banks lent substantial amounts of money to tens of thousands of at-risk mortgage borrowers, often at a rate of more than seven times earnings. In addition, 100 per cent mortgages were widely offered.

Post financial crisis, the average Mortgage is 3.4 times income and following new mortgage controls introduced by the Bank of England,  no more than 15 per cent of new mortgages will exceed a loan-to-income ration of 4.5.

The availability of 100 per cent mortgages has also been reduced, a minimum deposit of 10 to 30 per cent is now often required.

The Mortgage sector has also seen the introduction of in-depth affordability checks. Labelled as The Lifestyle Quiz, everything form the cost of a mobile phone package to hair cuts is now taken in to consideration when a decision to lend is made, the idea being to cement common sense into the process.

PPI has perhaps been the biggest case of financial mis-sell ever to haunt the UK’s financial services industry. Everyone from your next door neighbour to your gran, uncle and aunt have likely been a victim.

We’ve all seen the countless TV, radio and press adverts from solicitors advertising their PPI claim back services. In total, more than £16 billion has been paid out in compensation, though the final bill could well exceed £20 billion. At the height of the scandal a PPI complaint was recorded at a rate one every seven seconds and a staggering 5,000 new claimants still come forward every week.

In addition, August of last year saw the FCA force lenders to reopen in excess of 2.5million claims, paving the way for consumers to receive further compensation.

There we have it, five of the big hitters. However, the buck doesn’t stop here as there are likely more unethical practices still being undertaken today that are yet to be unearthed. One that’s poised to go the same way as PPI is gap insurance (according to an anonymous automotive industry source), but we’ll have to wait and see how that pans out.

In the mean time, if you have been affected by any of the above mentioned practices, why not share your experience with us in the comments below?