Should I invest in China, India or other emerging markets?

Currently, most of my investments are based on the UK economy. However, following a recent visit to China, my head has been turned to other international markets.

Having spent three weeks in China in hotels, I saw a fair bit of CNN and Bloomberg focused on China. One day, I saw a news report saying that the year-on-year GDP growth in China was ONLY 7.5%, which was considered a significant slowdown.

I then starting thinking about this in comparison to the low cost of living that I saw in Shanghai. Then, I compared it to what I saw in Shenzhen. For those of you who don’t know, Shenzhen is a “new city” in Southern China. Before 1980, Shenzhen was just a small fishing village. However, due to huge amounts of investment from domestic and foreign investors, it had a “city proper” population of around 10.4 million people, making it the world’s 12th largest city. In comparison, London and New York City both have 8.3 million and Los Angeles has 3.8 million people. China has 5 out of the top 12 cities proper by population.

All of this made me thing that China HAS to be an amazing place to invest. Therefore, I did some research…

The first thing I would look at is the performance of the main indices in China (Shanghai Composite Index – SHCOMP) against the UK (FTSE 100). I was also interested in the possibility that now, as the world’s second largest economy, China has reached a certain level of maturity. Therefore, I have also added the main Indian Indices (Bombay Sensitive 30 – SENSEX 30). The data I could easily find went back to 2003 for all three. As ever, I have based the indices at 100 at the starting point on April 2003. What I found surprised me: 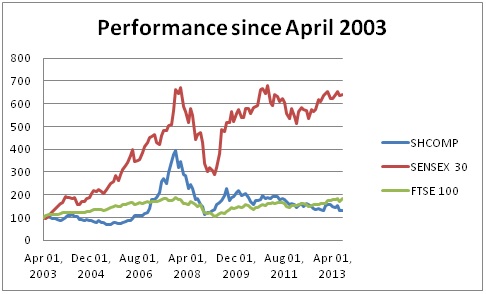 My first thought was that perhaps inflation was much higher in India than in the UK, and higher in the UK than in China. Therefore, I made an inflation adjusted comparison (based on annual figures) over the same period: 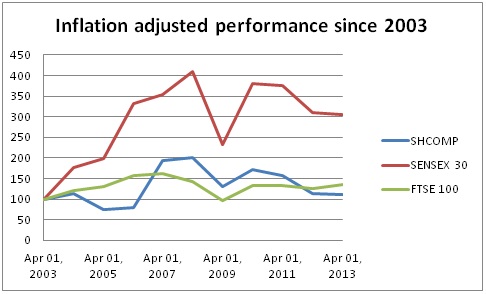 So it still seems that the order of performance is India, then UK, then China. 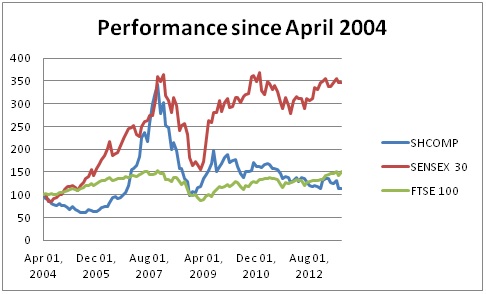 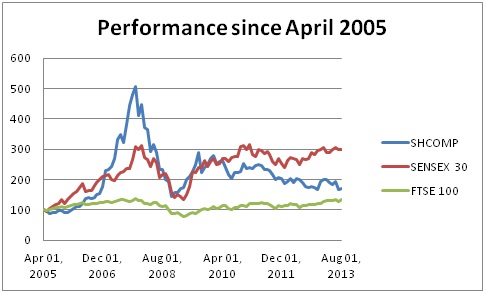 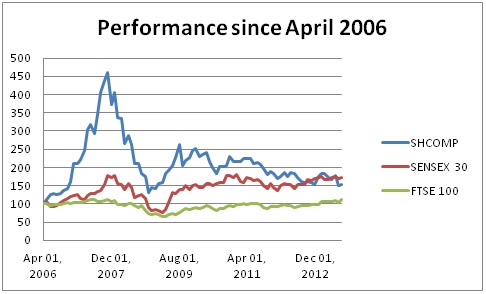 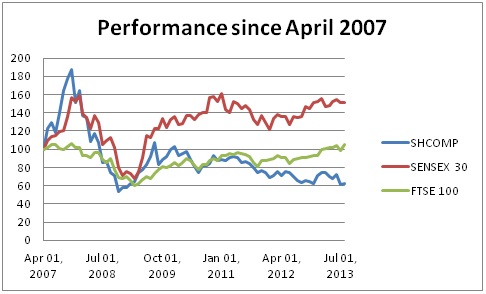 This evens things out a little but the ranking of performance for long-term investing in each market is pretty much the same as our original conclusion from the 2003 graph:

So, what does this tell us about where we should invest today? Errr…

Well, for China, perhaps the best days of growth are over. It has increased phenomenally in economic terms in the past 30 years. However, it’s now the world’s 2nd largest economy and so the growth will inevitably fall back.

However, I personally feel that maybe the Chinese market has underperformed in the past 10 years. Ten year performance on the SHCOMP since 2003 is 32%. In comparison, ten year GDP growth in China is 270%. Therefore, I think there is an opportunity in the China market and shall invest accordingly in the coming months.

However, historically over the past 10 years, the Indian market seems to be the real winner. There is much talk in the press of India “being in trouble”. That said the annual growth over the past 5 years (August to August) have been 16%, 14%, 2%, -6% and 13%, providing an average growth rate of 7.6% per year.

Determining whether the Indian market is overinflated is tricky. The market has increased by an incredible 640% in the last ten years. This is partially supported by an impressive 208% GDP growth over this period, but the comparison makes China seem more favorable.

However, I feel that there is a different opportunity in India, as the overall economy seems less mature. Therefore, it may be higher risk, but I am also placing a part of my portfolio (albeit a smaller proportion) in the Indian market.

While the UK is often seen as the boring investment, “boring” is often a very good thing in long-term investing. The new investments from the Chinese companies and government in UK projects demonstrate that they are equally interested in this long-term stability.

In my position as a fairly young investor, I am willing to embrace the risk of these markets and hence have diversified my portfolio across the three accordingly.
How do you feel about China & India as an investment? Do you think they have matured beyond “emerging market” status? What’s the new emerging market that you are interested in?