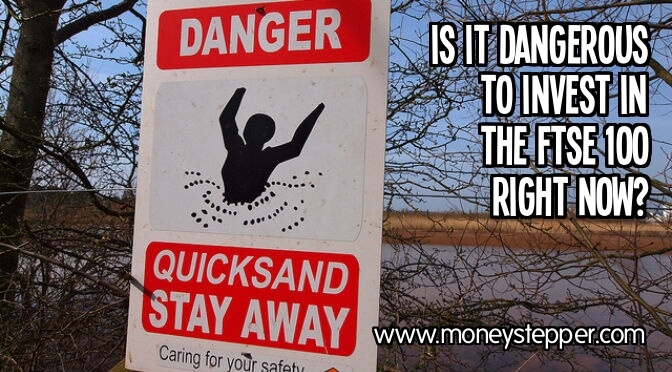 At Moneystepper, we generally advise that people place their long term investments into the stock market via low cost market tracking funds and ETFs in order to receive an average of 10% returns annually. But, is it dangerous to invest in the FTSE 100 right now?

This long term investing advice always comes with the disclaimer that investing in the stock market should only be done if you are investing for the long term (over 5 years, and preferably over 8 years) and that markets can go down as well as up.

It’s this last point that we are going to address in more detail today, by looking at the dangers of the current markets to determine is it dangerous to invest in the FTSE 100 (and other major indices) right now.

Before we do, I just want to summarize where that 10% return figure comes from as many people may have heard it (or similar figures) quoted, but not seen the backing support.

At Moneystepper, we use the figure based on the average return of major UK and US indices over the past 30-50 years.

An average of all the above gives around 10% per annum average returns in the long term.

Is It Dangerous To Invest – Reason 1: The FTSE 100 Has Never Gone For More Than 6 Calendar Years Without A Fall Of Over 5.5%

In fact, the FTSE has historically never had a 6 year run without a fall of over 5.5%.

So, people are concerned that it is currently dangerous to invest in the markets because we are due a large fall based on historical cycles.

Is It Dangerous To Invest – Counter Argument 1

Whilst it may be true that we usually have a fall every 5-6 years, the numbers above actually may tell us a different story.

Remember that the FTSE 100 increases historically by an average of just over 6% a year excluding dividends.

The average return over the past 5 years from the FTSE 100 is only at 3.1% per annum. This negates the need somewhat for the market correction.

Looking at the historical “corrections”, each had a period of significantly higher than average performance in the preceding 5 years:

Is It Dangerous To Invest – Reason 2: The FTSE 100 Is At All-time Highs

People generally think that it is dangerous to invest in the markets when they are at an all-time high because they must be overvalued and therefore due a tumble.

Is It Dangerous To Invest – Counter Argument 2

I’m not going to spend too long addressing this point, but will refer you to the following two articles which address why timing the market is not a good idea based on price, and that the market actually is a long way behind all-time highs when inflation is taken into account.

Related Article: The Market Is Not At A New High (Moneystepper)

Is It Dangerous To Invest – Reason 3: Dangerous Debt Levels

This may be the most concerning reason why it may be a dangerous time to invest in the markets.

The 2007-8 financial crisis was largely blamed on the unmanageable levels of debt in the finance sector which led to the downfall of Lehman Brothers and the fall of many other UK, European and US banks.

But what were these debt levels and how have they changed since the 2007-8 financial crisis?

Let’s start with the US Debt. In 2007, total US debt peaked at 337% of GDP. This can be very basically thought of a person having 3.37 times their salary in debt.

This was considered to be a significant factor in the last crash and a market wide review of capital requirements.

All that has really happened in the 7 years is that the debt has moved from the private sector to the public sector as government debt in the US increased in the period from 64% of GDP in 2007 to 102% in 2014.

But, why is this dangerous for markets?

A comparison to Japan’s journey over the past 20 years tells us why.

What has happened since the rise of public debt between 1992 and 1997 in Japan? Simply, they’ve suffered 15 years of deflation and a stock market that has gone from about 22500 to 18603 as I write this article. Over the course of 15 years (long term) the market has fallen by 17%.

And what is happening at the moment in the UK and Europe: there is a serious risk of deflation. Markets beware…

Is It Dangerous To Invest – Reason 3: Counter Argument

The argument against this is three fold:

Is It Dangerous To Invest In The FTSE 100 Right Now? – Conclusion