Since the FTSE 100 index began in early 1984, the overall performance has not been greatly different to the performance of the “risk-free” 10 year government notes. However, given today’s very low interest rates, returns on government notes should lag the market over the next 10 years.

During the last 12 months, United Kingdom government bond yield advanced 0.93 percent. From 1980 until 2013, the United Kingdom Government Bond 10Y averaged 7.4 Percent reaching an all time high of 16.1 Percent in November of 1981 and a record low of 1.4 Percent in July of 2012. Generally, a government bond is issued by a national government and is denominated in the country`s own currency. The yield required by investors to loan funds to governments reflects inflation expectations and the likelihood that the debt will be repaid.

The FTSE 100 Index, also called FTSE 100 is a share index of the 100 companies listed on the London Stock Exchange with the highest market capitalization. It is one of the most widely used stock indices and is seen as a gauge of business prosperity for business regulated by UK company law. The index is maintained by the FTSE Group, a subsidiary of the London Stock Exchange Group.

Therefore, to compare this to the market, we would need to obtain an average return of over 2.5% per annum over that 10 year period to outperform government bonds. 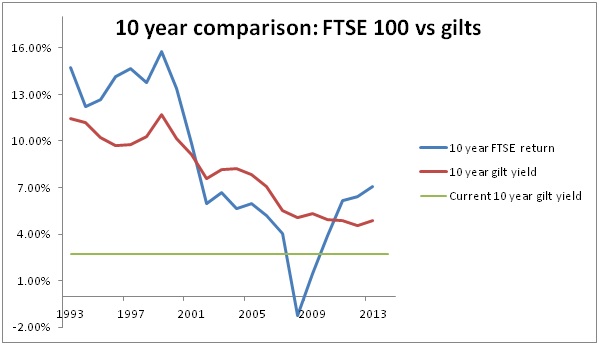 However, the difference is not perhaps as large as I would have initially expected.


What is the risk?

In 12 out of 21 years, the FTSE 100 returned greater 10 year returns than the government yield.

Therefore, on average, you are gaining an additional 0.5% per annum for the possibility of losing part of your capital in one year, or underperforming the risk free rate in 9 out of the 21 years.

The 0.5% doesn’t seem like much. However, as we all know, small changes in rates can add up over time.

Therefore, embracing the additional risk has returned £4,400 more in the FTSE, or an additional 44%.

This is a much less attractive yield than those previously offered and is caused by the very low base interest rates set by the Bank of England.

The average returns of 8.5% are much, much greater than the returns on the risk free rate.

What should I invest in?

This is why people have been saying “equities are the only place to go” for the past couple of years.

Yes, the FTSE could collapse 40% next week. But, the chances are, within 10 years time, it would have recovered to a level, which returns greater than 2.73% per annum including dividends.

When should I invest?

That’s a much harder question. Why not check out these posts to give you an idea of when is the best time to invest?