Over the next few articles, we shall explore some figures from the most recent national accounts, published on the Office for National Statistics website on 28th March 2014.

The key findings of the report have been noted as follows:

There are some interesting points in the headlines, and even more in the detail therein. Today, we shall focus on one of the headline points and what this means for the UK and, more importantly, what it means for me and you.

What is the household savings rate?

Financial advice from personal finance experts, gurus, bloggers and anyone else who cares is “pay yourself first”. This involves taking a proportion of your household income and putting it towards savings. This percentage saved is essentially your household savings rate. In general, this is recommended to be a minimum of 10%.

We are not managing this!

It is clear to see in the statistics from surveys held regarding the number of people who live pay-check to pay-check. However, even more explicitly, there are some figures hidden within the nation’s quarterly accounts which show the household savings rate. 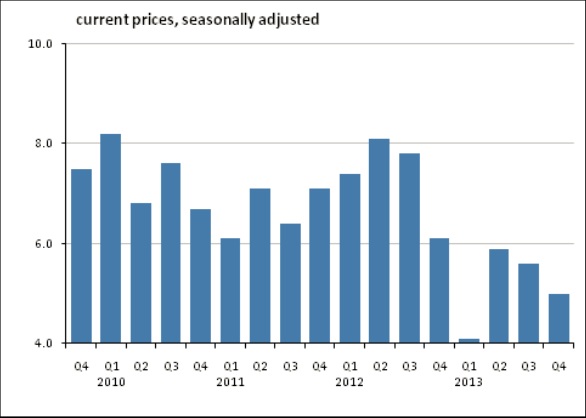 Therefore, in Q4 2013, we are on average saving half of the minimum recommended in most text books on personal finance.

How does this compare looking further back? Since ONS data began on this subject in 1987, we can see an interesting trend: 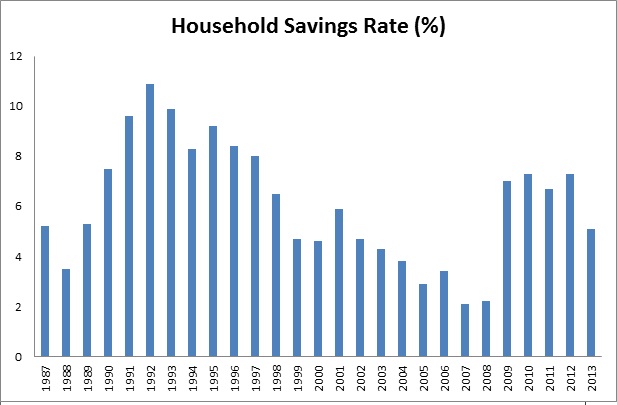 For me, this is remarkable and completely counter-intuitive. It seems that, in times of hardship and economic difficulty (1991, 2000/1 and 2009) and those years directly afterwards, UK households are actually saving more of their income that they do in the good times.

Conversely, strong economic periods (and bubbles) are characterized by significant and consistent spending, leading to a decline in savings rates.

What does this mean for me?

Therefore, the average household would be over £1m better off after 50 years of saving if they can maintain a 10% savings rate, rather than the average saving rate achieved by UK households in 2013.

And what can I do about it?

Make a budget and cut back on expenses where you can. If you can achieve a 10% (or preferably higher) savings rate, you will be very grateful to your former self in future years.

In the next article from this series, we shall explore the change in real households’ disposable income in Q4 2013 and historical comparisons.