2013 UK unemployment rates fell to 7.2% as the UK economic recovery continues. Data released from the Office of National Statistics (ONS) shows that unemployment rate significantly decreased between September 2013 and December 2013, with UK rates falling from 7.7% to 7.2%. This fall is the quarterly biggest drop in over 15 years.

The ONS also stated that the number of people claiming Jobseeker’s Allowance fell by 24,000 to 1.25 million in December 2013. 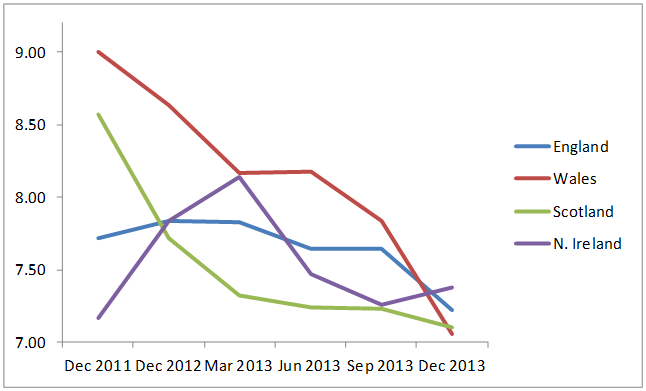 Unemployment has been generally falling in the UK for the past year. Specific decreases have been noted in Scotland and Wales. The 2013 unemployment rate in Wales has actually fallen from 9% to 7.1%, taking in below the rate in all other UK regions. 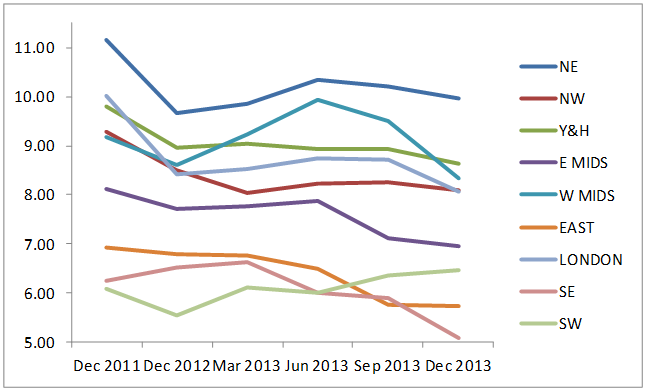 Taking a closer look, there is a notable difference in the figures between regions is notable (as it was for house prices in 2013).

For a comparison to historical rates and other EU countries, check out the following post.

What does this mean for interest rates?

In August 2013, Mark Carney – Governor of the Bank of England – provided forward guidance stating that interest rates would not rise until unemployment rates fell below 7.0%. However, at this time, no one really expected unemployment rates to fall so rapidly.

Furthermore, many analysts argue that, despite the decrease to November 2012 (7.1% at the lowest), a small increase in December to 7.2% is indicative of future moves. This is because a lot of the decrease in figures has been driven from part-time or zero-hours contracts. As the economy strengthens, employers will have the confidence to make these positions permanent and the split between full-time and part-time workers will edge back towards permanent contracts. When this happens, over unemployment rates will slightly increase and therefore the 7% unemployment rate may not be hit any time soon.

What do interest swaps suggest for future interest rates?

Looking at data from 11th February, interest rate swaps were noted at the following rates:

This suggests that even if interest rates were to rise this month, this year or not until 2016, the market isn’t expected the interest rate rises to be significant. If we imagine a linear increase, this would suggest that interest rates will only be 3.6% in 2019.

This steady increase is not only sensible, but given that property prices are rocketing in certain parts of the UK, but wages are increasing at less than inflation, it is required to ensure we don’t suffer another economic crash.