Following our previous analysis of the household savings rate and real disposable income, we continue our series of articles analyzing the 2013 quarterly national accounts, published on the Office for National Statistics website on 28th March 2014.

We summarized the key findings of the report in the prior articles as follows:

However, today I want to focus on something beyond the headlines. On page 21-23 of the report, we find some great international comparisons of GDP. 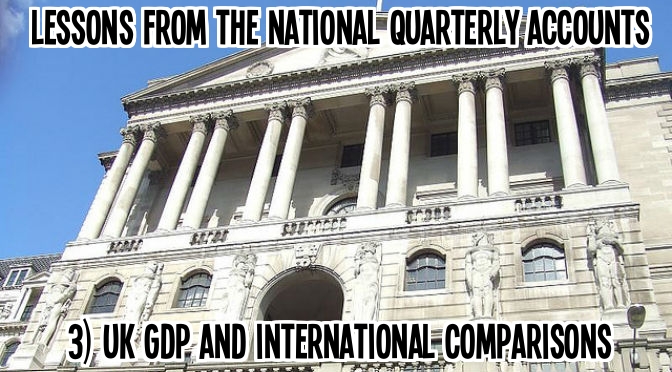 From the headline above, we see that:

But, how does this compare to other countries / regions?

GDP is an estimate of total economic activity. It is constructed by balancing the estimates from the output, income and expenditure approaches to measuring GDP which in theory are all equal.

Data used in this article will have been seasonally adjusted (SA) with seasonal effects removed to allow comparisons over time. Estimates are given in chained volume measures (CVM), sometimes known as real terms, with the effects of inflation removed.

How has GDP changed in the UK over time? 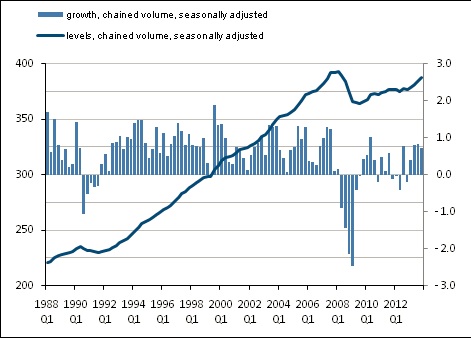 In the UK, we have noted the following GDP volume “growth” over the past 6 years:

We can see from this that, following the recession in 2008/2009, the UK GDP figures have been coming back and, in 2013, showed above average growth for the first time since 2007.

How has UK GDP changed compared to other countries?

Let’s look at how this compares to other countries: 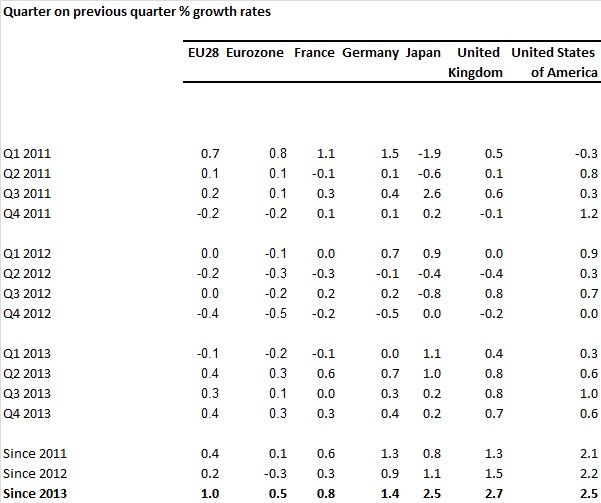 In 2013, the UK saw a volume increase of 2.7%. This slightly exceeds the GDP growth rate noted in other major economies (2.5% for Japan & USA). In comparison to the rest of the Eurozone, the UK GDP is looking pretty impressive.

Looking further back, to 2011 for example, the US growth exceeds that of the UK with average annual growth of 2.1% compared to 1.3% in the UK.

How did different countries deal with the recession?

Given the figures noted above, we saw that the UK suffered a decrease in GDP in both 2008 and 2009, the decline totaling 6.8%. Since 2010, the UK have noted increases totaling 5.7%, showing that the UK has not yet “recovered” from the recession.

What about other regions? 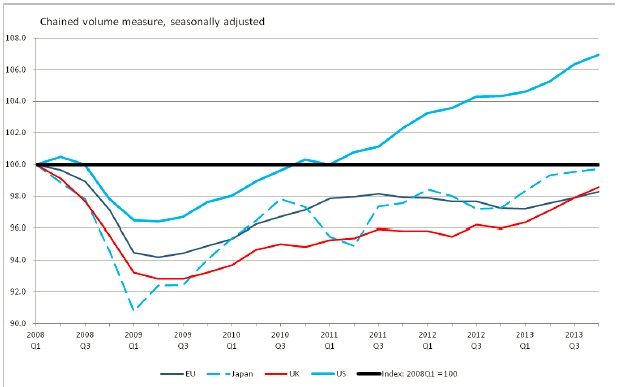 Japan and the EU have still not recovered and, in fact, are still almost 2% below where they were in 2008.

This is explored further in the moneystepper article: Is the Eurozone crisis over?

There may be many reasons why this is the case, but many people argue that quantitative easing has had significantly different impacts in the UK and US. I would disagree.

The US have performed quantitative easing over three stages:

What does this mean for me?

What does this mean for individuals?

Well, it is generally accepted that good GDP growth rate is positive for the inhabitants of a country (unless there is widespread corruption in the country).

Therefore, after a few tough years since 2008, the 2013 2.7% increase will hopefully be a sign of things to come. However, the concerns that these figures are artificially inflated due to quantitative easing may weigh down on this prospective growth.