Retail figures for December 2013 were released by the Office for National Statistics on Friday (17th January 2014).

The press have reported in their usual sensational way:

Let’s have a look at the data. Was it really a “surge”, “jump” or a “Record Christmas Increase”?

The first data set I have looked at is the value of non-seasonally adjusted “All Retailing excluding automotive fuel”. Value is key given the high promotion environment in the period. Many large retailers have noted the impact of promotions on their early earnings reports for 2014.

Firstly, the raw figures of Christmas retail sales since 2000: 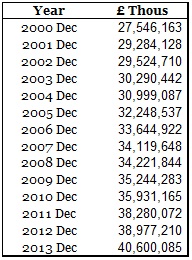 Indeed, a “record” Christmas. But these figures obviously mean very little until we include inflation. 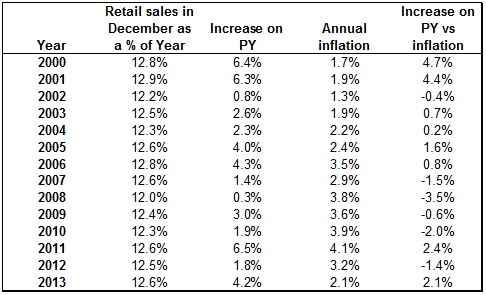 December as a % of the year

This represents December’s retail sales as a percentage of the entire year’s retail sales (including December). In 2013, this figure was 12.6%. This is the highest it has been since 2006, which would seem to suggest that Christmas was booming in 2013. However, there are two issues here.

Therefore, we won’t place much weight on this figure either.

Increase on prior year

Whilst positive, its difficult to state this increase as a “jump”, “surge” or a “record”.

Increase on prior year with inflation

The final column is the best way to evaluate the data. This shows the year-on-year increase in Christmas retail sales compared to the prior period, but including the impact of inflation for the year: 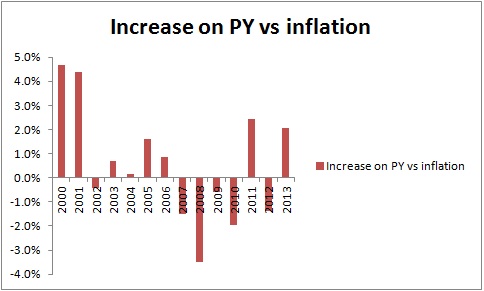 In December 2013, we had an after-inflation increase in non-fuel retail sales of 2.1% compared to December 2012.

The average year-on-year after-inflation increase since 2000 is 0.5%. Therefore, this is a significant increase compared to historical figures.

But, it still doesn’t classify as a “surge” or “record”. Again, in the last 13 years, there have been three occasions where the year-on-year after-inflation increase was above 2.1%.

Other areas of interest

What else does the data tell us? Who are the winners and losers?

Have you noticed the shops were busier this Christmas? Did you spend more or less? What do you think will be the winners and losers next Christmas?