Moving from UK to Mexico

Are you moving, or have you already moved, from UK to Mexico? Wherever you are moving abroad, there are hundreds of things to think about from a financial perspective. Well, hopefully we can help.

Following our moving from UK to France article, we continue our series of moving abroad from the UK articles with a contribution by a friend of mine, Phil Charter, who has moved from the UK to Mexico. Phil’s first hand experience should give you a first-hand experience of certain financial benefits and money mistakes to avoid when moving to Mexico.

Phil also runs the blog “Tall Travels”, which documents his daily life and adventures over in Mexico. Anyone who is considering teaching abroad or moving to Mexico should definitely give it a read. Anyway, take it away Phil!

Hi everyone. I’m Phil from Tall Travels and if you’ve ever wondered how many pesos there are to the pound, or what taxes the richest man in the world Carlos Slim pays, read on.

I don’t claim to be an expert on Mexican finance by any means, but I have the personal experience of actually moving to Mexico and hopefully my thoughts can help you think about the things that might not immediately come to mind when moving to Mexico.

Firstly, the country is fairly consistent on its labour policies. Whilst around 25% of the population is self- employed, employers have strict rules to follow to achieve certain standards, so much so that the whole of the country is paid on the same day every two weeks resulting in horribly long lines at cash-points.

There is the mandatory Christmas bonus equal to about 1 months net salary paid around 20th December.

Most companies also match the employee’s contribution to a yearly savings scheme called “Fondo de Ahorro”. The employee can pay in around 11% of their net salary with the money paid in a lump sum in July. I have heard that the idea of the scheme is to encourage saving, but the fact that it is paid out yearly means that most people use it to make big purchases like cars or TVs. That sad, I’m certainly not complaining about getting an extra 3 months’ salary every summer!

Although bank employees do seem to be recruited from the University of “Computer says no”, the services offered in Mexico are not bad. Many banks offer current accounts with no banking fees and no ATM fees. Some banks are also linked closely with the United States due to so many migrant workers, and have money transfer services with low fees.

The cost of living in South Mexico is relatively low. One thing that makes Mexico an attractive country for expats is the low property and rent prices. In London, I spent around half of my net wage on rent and utilities, I spend one sixth here. Land prices are increasing, but outside of the top five cities the country is still sparsely populated. You can rent an apartment for US$100 per month, and even buy a new house for around $25,000.

The low income tax rate could be seen as a positive or a negative here. The rate is 15% between MP$125,000 and MP$1m although much of the workforce would fall under the lower limit and therefore pay less. The employee also pays around 9% social security with the employer contributing more.

Corporate tax and earnings over MP$1m is 30%, which compared to many of the European super-taxes is worryingly low. For a country perceived as socialist by Americans (well we do have healthcare), anger is growing at the Mexico City oligarchs who run huge monopolised businesses (telecommunications, construction, credit unions and food companies) and pay only 30% tax on their billions of pesos.

However to raise the tax rate may force these businesses to set up shop in a cheaper country in Central America or elsewhere. The Government is trying to increase competition in certain sectors without pissing off the business owners. Not an easy task.

The chart below, taken from the economist website, shows the difference between labour costs to employers, and employee take home pay: 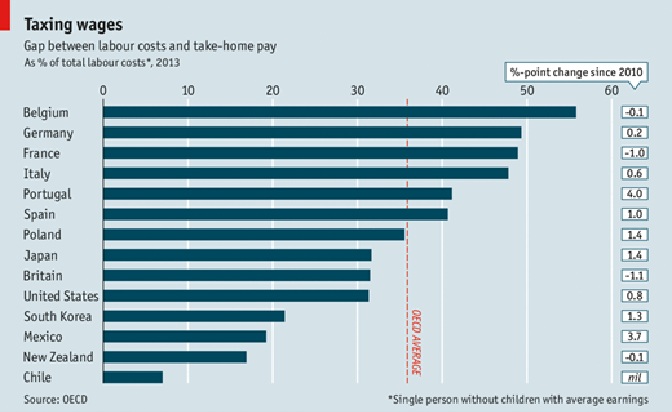 If it costs 100 pesos per day to employ someone in Mexico, the employee gets an average of 80 pesos net. All taxes and other overheads total an average of 20%. As previously mentioned, this is due to many Mexicans pay falling under the lower tax threshold.

In fact, the average national minimum wage is around MP$65 (3 pounds) per day. It’s great that workers in Mexico get to keep the majority of their pay, but this has created a HUGE reliance on the nationalised petroleum company PEMEX and its corporate contributions which have been decreasing due to lack of investment and inefficiency.

Moving to Mexico – Things to Avoid

The positives above do make Mexico an appealing place to move financially. However, as with all countries, there are also some financial negatives to consider before making the move!

My biggest gripe about banking and business here is the lack of customer service. A few weeks after opening a bank account I received a call saying they would close it unless I provided them with my ID card. Their scanner was broken and they couldn’t copy the card and although I suggest alternative routes (IT help, emailing them, photocopying it etc) they just kept repeatedly trying to use the broken scanner.

There is certainly no culture of apology (the customer is not always right) and no appreciation of wasting the customer’s time. If you have any banking to do here, you better be prepared to come back because things rarely get resolved on the first attempt.

Inflation is currently within the government’s target of 4% annually. However, some consumer prices have drastically increased leading to us feeling the pinch a little. Figures taken from Trading Economics suggests that transport prices have increased by 8% with petrol duty to rise next year too. Alcohol and tobacco have risen 7% and restaurant and hotel prices have also jumped by 5%.

The IVA goods tax has always hovered around the 16% rate apart from in border areas, but this year, coach journeys, pet food, chewing gum and some food and drink have been included whereas before they were exempt from the tax. Mexico was in the headlines recently for its soda-tax with the revenue generated being used to help fight obesity. This is certainly no bad thing in my mind, but I do wish my cat wasn’t so damn greedy, he’s costing me a fortune.

Unfortunately pay day loans and ridiculous credit rates have a real stranglehold on Mexico. With all of Mexico’s resources and potential, the country’s growth has failed to keep pace with other American nations in the last twenty years.

When I was arrived I was impressed by the signs of affluence here though. I now realize that everyone’s smartphone, flat screen TVs and refrigerators are just purchased on credit with rates upwards of 20% A.P.R.

Coppel and Elektra are two major department stores with thousands of shops country-wide. They offer credit to any customer which makes them popular even with above average prices. The family that owns Coppel has an estimated wealth of a measly US$16 billion.

Well there you have it. Overall I think Mexico is an attractive place to live for expat workers although on a personal note, the fact that the 1, 2, and 5 peso coins are almost identical proves more irritating than wearing undersized coarse woolen underwear. Now if you’ll excuse me I’ve got to find the right change for the bus, I better get my magnifying glass out.