Outside of London, we barely have growth, never mind a bubble. However, in London…

…it’s a completely different story. We’ll come to that later.

Firstly, let’s have a look at three indicators which show that the current UK housing market as a whole isn’t in a bubble that is in any danger of bursting any time soon. 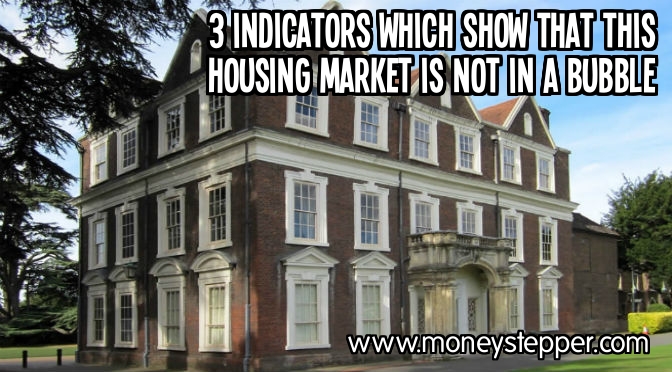 1. Annual growth is not historically exceptional

The mainstream media in the UK has become very excited in the past few months regarding the year-on-year growth rate of house prices in the UK.

Following the release of Q1 data, we were subject to many headlines suggesting that the UK property market was soaring out of control. Outside of London (we’ll come to this later), this simply isn’t the case.

Q1 2014 year-on-year growth was 9.2%. Granted, this seems high when interest rates on savings accounts are next to nothing. However, this is by no means an exceptional performance for the UK housing market.

Since UK housing data became available (from the Nationwide House Price Index) in 1952, there have been 252 quarters. The average (mean) year-on-year increase over this period was 8.1%.

So, yes, Q1 2014 is above average, but only one percentage point above. This is high, but by no means is it exceptional. In fact, there have been 86 quarters (one in every three) with a year-on-year growth of over 9.2%.

Would we really be getting this excited about it being 2°C above average temperature? Of course not (well, the mainstream media obviously would – if there are two things they love to sensationalize, its housing market movements and the weather – 20°C today => “BRITAIN IN HEATWAVE  – TEMPERATURES THE SAME AS HELL” or something like that…).

2. The recovery has not yet recovered

Another theme I have noted in the mainstream media is that prices have recovered from the 2007/2008 crash and are now soaring well above these levels. Once again, this is only true in London.

Looking at the UK in general, the peak quarterly house prices were reached in Q3 2007 when the average UK house price reached £184,131.

The Q1 2014 average house price (despite these so called exceptional recent increases) only sits at £178,124, which is still around 3.5% less than previous highs.

3. Housing price increase have only just started to outperform inflation

Another significant factor we must consider is inflation. We have previously noted the impact that inflation has had on real wages in the UK. However, what impact has it had on house prices?

Therefore, more accurate headlines would state that real house prices (after inflation) have just started to return to growth, which is entirely expected.

This graph, included in the Nationwide HPI data, shows that the recent increases are (shock horror) pretty much in line with the long term trend in real house prices: 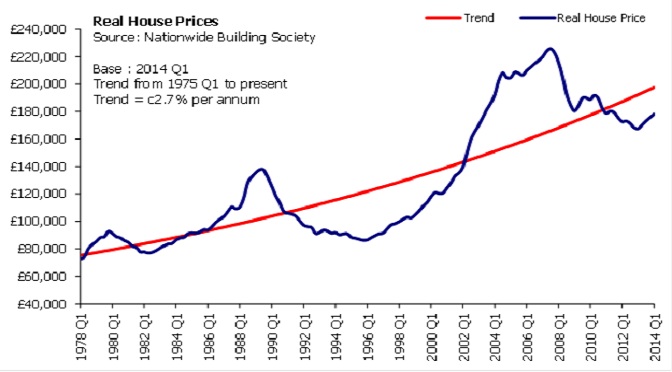 London is a different story

One thing that the newspapers have highlighted, and correctly so, is that London is a different beast. Let’s revisit these three indicators, but only for the London area:

In my opinion, although I predicted this 6 months ago and we have only seen rapid growth since, this level of growth in London is unsustainable. Not that I expect it to dramatically fall any time soon, but I think we should expect a few quarters which move back to the mean in the future months as the ripple effect takes hold and the rest of the UK catches up.

The rest of the UK (London excluded)

Again, if we look at these three indicators for the UK, once we have stripped out the London area (note that these figures are only estimates as I have weighted all other regions equally):

For anyone outside London, there is a long, long way to go to get back to previous levels.

Let’s imagine that in the next two quarters, the London house market pops and drops 20%. For London, this would simply cancel out the prior year’s growth: nothing major, just a correction in the market.

However, if this has a knock on effect to drive down prices elsewhere in the UK by 20%, this would lead to the average house price outside of London to be 25% below its nominal levels from 2007 and almost 40% below the inflation adjusted amount.

This would leave the majority of people who bought a house in the rest of the UK in an unenviable position of flirting again with negative equity and struggling to make ends meet.

Therefore, I have two questions for you:

I would love to hear your opinions, so please leave a comment below.