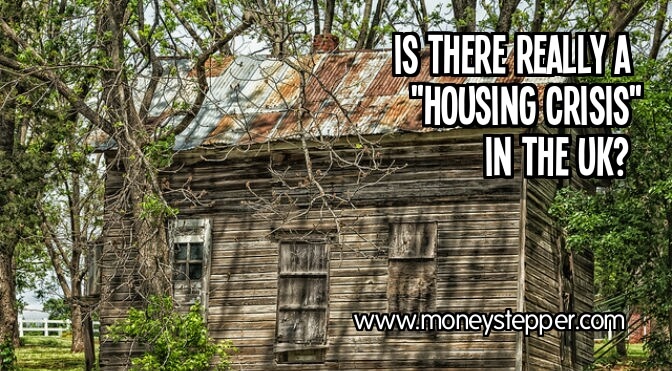 House prices have generally increased since the last housing market crash in 2008. However, the latest round of headlines reported this in a consistently bizarre way, stating figures which didn’t support rapid growth combined with headlines stating a housing crisis in the UK!

For example, I noticed this on my google finance feed last week: 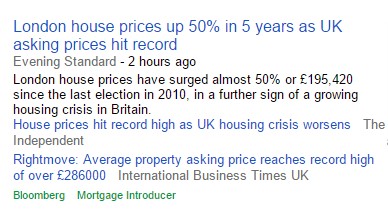 “Surged almost 50% since the last election in 2010” and “UK Housing Crisis” are quite sensationalist headlines aren’t they? Let’s examine these statements further.

This headline comes from an Evening standard article, which quotes price increases from Rightmove as their source. They don’t, however, give any specifics as to where these figures are shown in the Rightmove reports, indexes, blog or site.

Okay, let’s have a look at the Righmove website to see what we can find. After a bit of looking around, I can find the “House Price Trendometer”. Remember, the figure quoted in the Evening Standard is that “house prices have surged almost 50% or £195,420 since the last election in 2010”.

Therefore, I’ve put May 2010 as my start date but the trendometer only goes up to the end of 2014, so I can’t substantiate their claims here.

Instead, I find some relevant data in the Rightmove House Price Index report.

Using the above figures from April 2010 until April 2015, the actual percentage increase which is quoted as almost 50% is more accurately 40.9% over the five year period. This gives an annual house price increase in Greater London of 7.1% per annum over the period.

This is described by The Evening Standard and The Independent as a “UK housing crisis”. Let’s address two reasons why this is simply bull!

For figures in the long-term, we can turn to the Nationwide House Price Index, which dates back to Q4 1952.

Can anyone explain to me why this represents a “crazy market” in Greater London since the last election? Where is this housing crisis?

Secondly, as we’ve previously spoken about in detail in the past, a London housing crisis is not the same thing as a UK housing crisis. I know this because when I was about 3 years old, I learned the difference between a country and a city. It seems, however, that the mainstream media have forgotten this distinction!

The same figures for average house prices across the UK, taken from the Nationwide HPI Index, is:

Therefore, the annualised change is around 4.0% per year.

Therefore, the “UK housing crisis”, which is used in the context that house prices as increasingly too quickly and people can no longer afford to buy a home, is based on the fact that annual house price growth over the past 5 years is around half of what it usually is!

That doesn’t sound like a housing crisis in the UK to me. One thing I do know about a crisis though is that the word “crisis” certainly gets the readers’ interest and sells advertising space nicely…! Funny that, isn’t it?