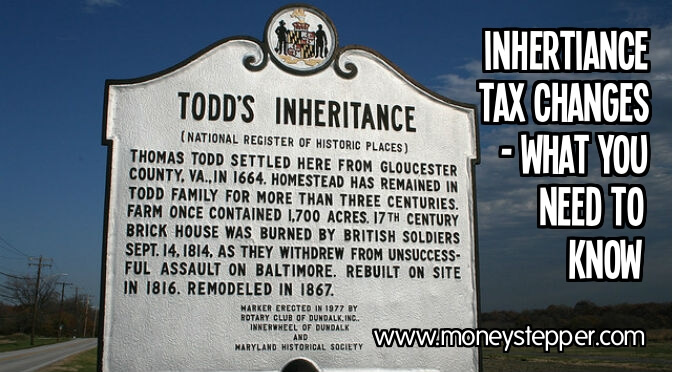 The pension changes that have come in thick and fast since the 2014 Budget Announcement have transformed pensions from something that provides an income to you – and only you – when you stop working, into a tax-efficient savings vehicle.

While the reforms lifted the restrictive access to people’s private pension funds, making income drawdown an attractive option for many, annuity rates fell as their attractiveness waned.

But, there were more surprises to come for pensions: taking his vision of pensions as a saving scheme, the Chancellor announced in last year’s Autumn Statement that – as of the start of the 2015/16 tax year – pension pots can be passed on as inheritance with far less tax implications.

Therefore, we take a look today at the inheritance tax changes you need to know about.

Before April 6 2015, anyone who inherits a pension fund that’s in drawdown will have to pay 55% tax on the balance – with the exception of spouses and children under 23, who pay tax at their marginal rate (20% or 40%) on any income drawn from the fund.

If the deceased was over 75 when they died, children under 23 are also taxed at 55% – although spouses still benefit from tax at their marginal rate. The only time an inherited pension fund isn’t taxable is if it hasn’t been accessed.

From the start of the 2015/2016 tax year (beginning on April 6th 2015), anyone who inherits a pension fund from someone who was under 75 when they die will have no tax to pay, either on the lump sum or on the income they draw from it – no matter what their relationship to the benefactor. If the pension belonged to someone aged 75 or over, their beneficiary is charged income tax at their marginal rate. These rules apply to both unused pension pots and pots that have entered drawdown – but the lifetime limit of £1 million on pension funds (reduced from £1.25 million from April 6 2015) will control the amount of tax relief people receive on inherited pensions.

The rules on annuities are not set to change: they still cannot be passed to a beneficiary – other than a spouse, if this has been previously stipulated – without great expense. Although some critics have said that this policy could make annuities a less attractive option than drawdown in the future, it’s important to note that purchasing an annuity in retirement is still currently the only way to guarantee a retirement income for the rest of your life. There are also plans to allow pensioners to sell on their annuity from April 2016, but the process around this is still yet to be detailed.

The Inheritance Tax threshold, or ‘nil-rate band’ – the value a person’s estate can be before the beneficiaries have to begin paying inheritance tax – currently stands at £325,000 for a single person, or a £650,000 joint allowance for married couples, and these allowances are not set to rise before 2017. With house prices continuing to rise, and the average pension pot standing at over £70,000, it might seem that this relatively low threshold means that almost all estates are taxable. But a key benefit of saving into a pension scheme is that the funds aren’t classed as part of your estate – leaving property and other assets more likely to fall under the threshold, and making the new rules on inheriting pensions even more important to understand.